Here is the snow map for tonight's heavy burst of snow. Elevation won't play as big of a role this time around but it doesn't hurt in this scenario as temperatures will remain below freezing longer to allow the snow to accumulate. For each color indicated the higher end of the amount will be in the higher terrain and the low range in the valleys. After the snow it will turn to sleet, then freezing rain, and then just plain rain. Low lying areas will have the freezing rain longer than anyone else. That means Sussex Boro, Vernon Valley, Montague, and other low lying areas. 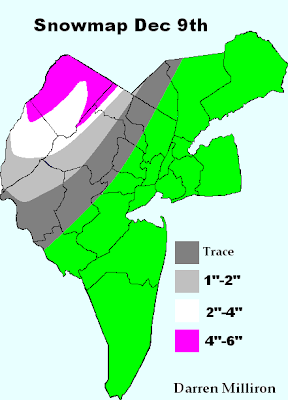 Posted by Darren Milliron at 2:27 PM