The storm is approaching our area from the southwest and will bring accumulations to the region. The further north and west you go the more you will get. It will start as snow for everyone but quickly change to rain for central Jersey as the warmer air wins the battle. Areas north of interstate 80 will get several hours of accumulating snowfall then changing over to sleet for several hours which will create a protective layer over the recent snows. By the time it changes to rain the system will nearly be out of the area leaving most of the frozen precip still on the ground. This map is off the RPM model and I think it has a good handle on the system. 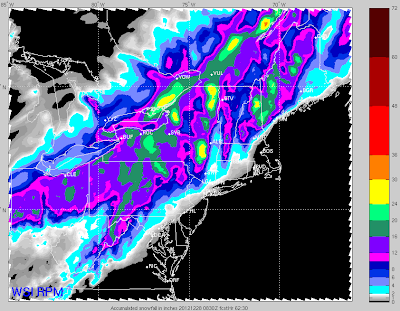 After this system we have another heading up the coast by the weekend which will be an all snow event. Looks like we could get a few inches before the month comes to a close.
Posted by Darren Milliron at 8:00 AM