Take a look at the most recent NAM run: 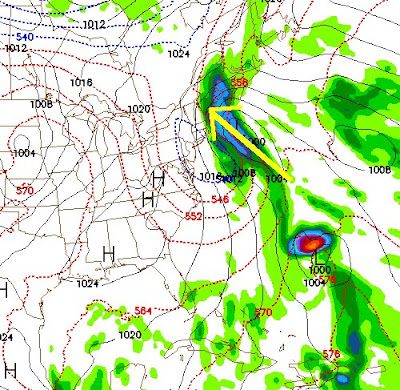 That's a storm backing in off the coast. Exactly what I was thinking would happen nearly a week ago. This will end up bringing snow to the highest elevations in New England. Killington Vermont has already had 24" this season and will surely get even more early in the week. If the cold air mass was a little more potent and the storm track was further south then I would put us in that snow regime, unfortunately it didn't work out that way.

Although it already snowed 4 days by this time last year (about 1" in most places, 5" at high point) we are still only and inch behind last years snow totals for this date. So don't feel like we are getting shafted, cause the season hasn't even really started!

Next week it's going to get warm, and in my mind "one extreme leads to another". And I keep proving that theory of mine right. I have some EXCITING NEWS! A major stratospheric warming event is occurring over the polar region, this will send the arctic oscillation deeply negative and signals to me that an arctic outbreak is not more than 2 week away. It look like the snow makers at Mountain Creek will be turning on around Thanksgiving, with the aid of natural snowfall. The mountain will most definitely open on time and trail counts could rise quickly through the month of December.

Check out this warming event. The warning siren is going off in my head.

Posted by Darren Milliron at 5:23 PM