Where is the cold?

Where is the cold air? It seems like its coming next week, but always seems to keep getting delayed. The problem, a strong Pacific jet as seen below in the left portion of the loop. This is aiding in keeping the cold arctic air locked up over the polar region and when it does make its way into the lower 48 it quickly gets swept away.

The model are showing much colder air on the way but it could be short lived if this Pacific jet doesn't start to weaken. It's simply not allowing for a more winter like pattern to set up over the country and keeping the NAO and AO in positive phases. Another thing we look for to indicate cold and snowy weather is stratospheric warming events in the higher latitudes, and it looked a few weeks ago that it was occurring but the warm regime has collapsed as seen below.

So what's the cause of this persistent jet? Another meteorologist (DT from Wxrisk, a great guy to follow on Facebook) pointed out it could have to deal with the strong intensity of the QBO. The QBO is an upper level wind pattern over the equator that actually switches direction every year or so. So I looked up the past years with a a similar QBO pattern going into the winter months and highlighted them in yellow, red dots are no match. 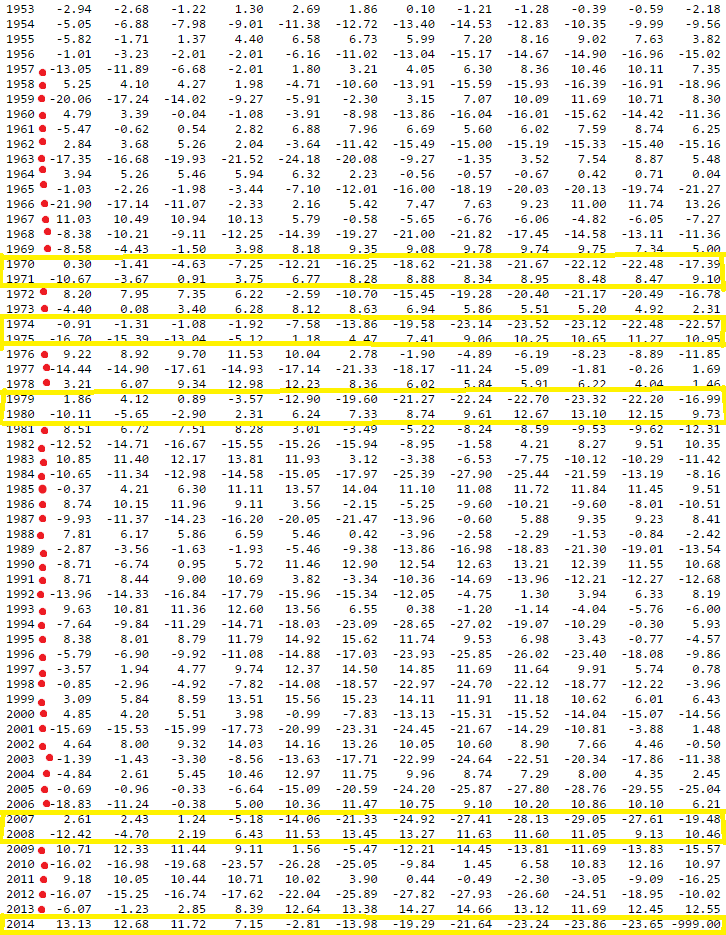 Each of the years season snow totals were about half of New York City's average snowfall. That is not a good sign. Interesting enough as the QBO began to weaken in the middle and late winter it finally allowed for bigger snow storms and colder weather. I take this as a sign that our snowiest month is yet to come in NJ. Just remember these are New York's averages and we get about double the snowfall per season so this is just to get an idea of what the trend is.

I need to do some more research on this. If what I'm seeing here has any merit this winter is not going to be a very memorable one... I need to figure out if the other years had signals that match up with this season, if that's the case my winter forecast is a bust.


Posted by Darren Milliron at 8:11 PM