As I have been talking about for the better part of two weeks now cold air is on the way and snowmaking at Mountain Creek will most likely beging this week! Posted below is the Keancast 7 day for Vernon NJ: 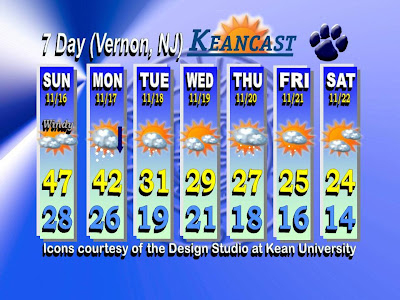 
Sun: Sunday will be a transition day as it will be turning windy and the temperature during the day will be comfortable in the 40's.

Mon: As the cold front comes through the highest elevations in Northwest Jersey will be seeing the rain changing to snow and some areas may pick up a nice coating at the highest mountain tops.


Tue: As of the 00UTC run of the models we should go below freezing Monday night late and won't rise above that 32 mark with some lake effect snow flurries and squalls in the area. High point ridge and the mountains in eastern Sussex and western Morris may pick up light accumlations.


Wed: The cold will begin to moderate Wedneday but just as it starts to pull out a re-inforcing shot comes down out of Canada dropping temperatures even more.


Thu: With the colder air coming down a clipper system may also come through the area very quickly and once again the highest elevations above 1,000 feet may get light accumulations, which is a frequent occurance this time of the year and expected.


Fri: I may have gone a little colder with the temperatures than most people but based on the lastest models and some personal instinct this forecast is generally for the higher areas in Sussex. Snowmaking at the resorts would now have had 4 solid days of snowmaking.


Sat: Yet another cold shot of air comes into the area and the expect low may be a record breaker for that date but this would be day 5 of none stop snowmaking and would most likely allow for the earliest opening of Mountain Creek ever.

Longer Range: After Saturday the forecast get's harder as some serious systems are on the maps but it seems likely that the cold weather will stick around for the rest of the month and will make November yet another month will above average snow and below average temperatures.


Posted by Darren Milliron at 1:24 AM