Before I get started with talking about Monday-Tuesday weather event let me just tell everyone that if you plan on doing anything outside tomorrow you might want to reconsider. Tomorrows atmosphereic thickness value will get down to 503 and that's only rare in January but UNHEARD of in November. Ofcourse it is November so expect temperature to struggle into the upper 20's, if this was January it would be one of those days with a high of around 8 degrees. Let's move on to the storm...

It seems that everyone else Weather.com/Accuweather/NOAA, and most TV meteorologists are calling for mostly a rain event for our area but for some reason and I wasn't seeing that. I was seeing mostly snow, but I may have been wrong. Let's check out some issues.
1. The first is something called cold air damning. This happens when the east is under a cold air mass then a warmer air mass moves in from the west, because cold air sinks into the lower elevations it gets trapped, this actually happened a lot last year with sleet and ice events. You might ask how the cold air get's trapped? Well we have a chain of mountains going from Alabama into Maine and the cold air usually get's stuck on those east slopes from an extended period of time (that's us).
2. The GFS (our governments model) is showing some nice snows for our area: (Click for bigger image) 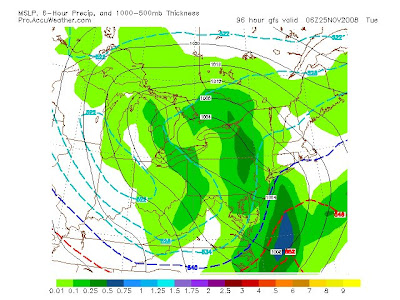 3. And the atmosphereic sounding form K12N (Andover airport) shows mixed precip, but the elevation there is only 583 feet so this means areas above 1,000 would get all snow.

4. Now here is the bad thing. I have been saying that European is the best out there and whatever it says is extremely accurate. It shows the system cutting into the lakes and bring us some mixed precip on the front end with the cold air damning, then some rain showers, and finally ending as a little snow. We still have more model runs and the short range models have not picked this up yet because it's too many hours out. Here is the Euro, because of this one model the precentaged on nice snows in my opinion is down to 23%, things can always change. 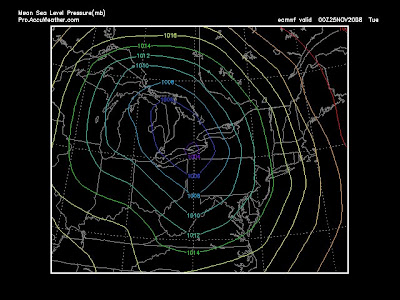 I will update later today after the 6:00 models come in. Cross your fingers.
P.S. If this storm doesn't work more cold air will follow with low pressure systems! Get excited :)
Posted by Darren Milliron at 10:09 AM