First off take a look at what happened in the highest elevations of northwest Jersey. It was amazing! 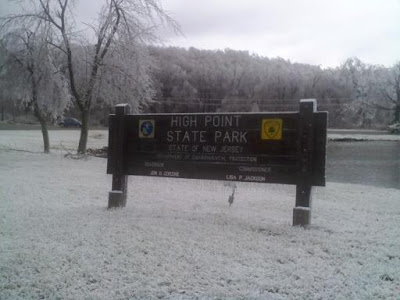 Half an inch of freezing rain:


Mountain Creeks high temperature for Saturday should only make it to 26 degrees allowing for them to rebuild the base that they lost in the previous rain/ice storm. As of now Creek is covered in a thick accumulation of ice which forced them to close down this week but will be able to open once conditions become safe and power is back on.
Longer Range:
Well after a cold start to the begining of the week it looks like things will warm back up for 4-7 days as a trough will settle in the west for the first time this winter and a ridge over the east.
GFS 18z showing warmth up the coast:

And for snow, I dont see much hope of anything until around the 20th but you know what these models are like. Its something to watch but don't get to exicted.
GFS 18z run:

Remember, winter is far from over, in fact it actually hasn't started yet! We have a lot of winter to go, just check that in mind. What we need is a pattern change...
Posted by Darren Milliron at 6:51 PM