Well, this winter may not seem to be "harsh" but things are now changing. Did you notice that the last storm over Sussex and Morris county was mostly snow? The area got between 6-9 inches of snow and brings the season to date snowfall to 35.50"-45.00" so far. That brings us closer to our average and I still think we will make it to atleast near our average of 65"-75" inches. So Darren, you really think we can get 30.00" more inches before the end of the snow season?

Yes I do. And here is why. Coming up this week the models are showing a storm coming in going from rain to snow but that 540 line is really close to us and since we have 1,000 feet of elevation that usually helps us out a lot. If the models keep trending a little colder and snowstorm like this could produce 6-10 inches but right now that seems to be just north of us. I'll update this later on when I know more.

Now if we don't get that storm there is a leap year storm on the maps as well! So February which already dumped 13.63"-14.25" across the area may bring even more. And could chop down at that 30.00" we need to hit average.

March which is usually our snowiest month of the season with knee deep snow looks to come in like a lion and I think it will. We still have one month left of winter and March could be the best of all, and I'm really looking toward the first week of that month. And then April, yes April always brings us something in the way of snow, and I'm sure it will. We have had April snow for the past 5 years since I starting keeping records and they range from 4.5"-Trace amounts, but its still snow!

So this season could in fact change its color before its too late! I hope...
Posted by Darren Milliron at 12:59 PM No comments:

A bit of Astronomy

Well the lunar eclipse tonight was quite a sight. The moon was located in the constellation of leo the lion during the event. Besides the moon there was also two other things that were interesting. The Star Regulus in leo was visbile since the bright light of the moon wasn't over powering the bright star. Also the Planet Saturn was visible and I was a able to catch a sight at some of its rings. It was an amazing sight!

Here are some moon pictures. Sorry for the poor quality, it wasn't a "good" night for astro-photography.

Moon during height the middle of event: 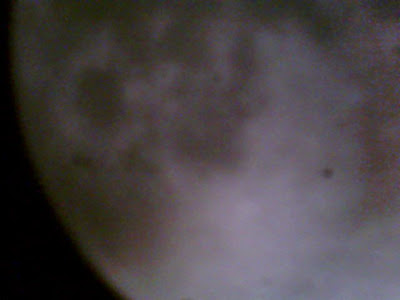 This didn't come out good but you can cleary see the suns relfection and earths shadow. It's just amazing... 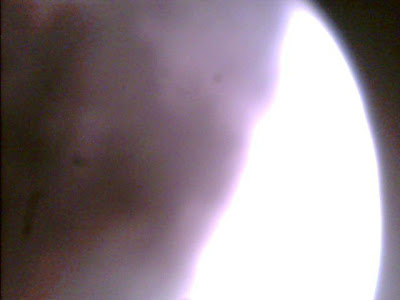 Posted by Darren Milliron at 10:18 PM No comments:

We are going into a new pattern, one that I see as favorable for snow, believe or not. First all, the La Nina which have been responsible for a warm January and February is now starting to become weaker, which is a good thing. The NAO also has its strongest influence during March and April and believe me, it will go highly negative.

As I look out my window right now its 38 degrees and raining. Here in Netcong we only had 29.30 inches of snow this season but I can how how we will end up near average for the winter because March could hold 1, 2, maybe 3 coastal storms that give major snows to the Appalachians and maybe the big cities. And April seems to hold some snow as well which is not to rare in northwest Jersey.

Cold weather will dominate this whole week after Monday's rain and clipper systems will ride through the track and if any precip falls it will 100% be in the form of snow. And I think anyone from Maryland northward will pick up a nice blanket of snow. After that I can't say for sure what will happen, perhaps one more rain storm before our storm pattern change from snow to rain, to rain going to snow. I can see how that happens and my final forecast for 07-08 winter season total snowfall ranges from 43-55 inches. That still puts us 1-2 feet below average but if solar cycle 24 don't kick in soon up coming winters may be more than we bargained for...

More in coming days...
Posted by Darren Milliron at 9:35 PM No comments:

That's a lot of precip, and most of it is still on the ground in the form of glacial ice. That was a joke, but its like a glacier. Solid 4.00" of white ice.

Yesterday the DGEX model was showing snowstorm coming up the coast giving a nice snowstorm for the Appalachian mountains and rain for the city. The NAO was also going negative at the time which helped me believe that situation better. Current runs show a different solution which shows heavy rains from North Carolina, to the Green Mountains of Vermont, and into Maine. But on the back side of all this is the EURO model is showing a massive BLIZZARD for parts of the mid-west from Chicago north and west. Snow there could be measured with yard sticks instead of 12" rulers and snow drifts are a real possibility. I like snow more than anyone else but not if I'm not getting it! This is the mostly likely senario but....

That's right there is a but. Some models are tracking the storm a little closer to the east than others and I think that will come about in all models. The cold air mass behind the storm will push the storm father east than the models are showing. But still not in favor for us. But, yes another but, the NAO is now slighty negative and if and if it can go negative I think we have a better shot of rain changing to snow over the Appalachians. This is a possibility but chance is only around 10%. Looks like a horrible rain storm which can cause problems with the ski season, perhaps making it end sooner. I sure hope not... If anything changes I'll be here.

This has been one interesting storm. Here in Netcong we picked up 3.25" inches of snow before the change over to sleet. After hours of heavy sleet we picked up .75" inch of sleet then the freezing rain began after mid-night. From there 1 full of inch rain fell while we were below freezing for a total accumulation of frozen precip of: 5.00". Since then it has been raining heavy and over an inch has fallen already. We hit our high for the day at 12:30 at 34.5 but now the temp has dropped to 33.6 getting closer to the freezing point. I already had snow the ground from snow squalls the other day and I have a current snowpack of 4.00" inches of slop. The winds are currently out of the NNE and temp is dropping steady as of 1:00pm.

Season snow total for Sussex county from Netcong to Vernon:


Enough stats, lets talk about whats going to happen. It seems as if the storm will end as snow for most of northern New Jersey and a coating to an inch could accumulate. I am worried about all this rain flash freezing because overnight temps in Sussex will get down to 20 and even the teens so watch out for dangerous driving and walking conditions. All the schools up here got out early yesterday, had off today, and will most likely have a delay tomorrow. This puts most schools in the area out of snow days.

As for the next snowstorm I see a storm coming Sunday into Monday. The models are showing snow changing to rain event but some factors are leading me to believe the storm will track farther east than the models are showing. But knowing our luck it won't be a big snowstorm which we all have been hoping for. I will do another post if and when the track changes to one that favors snow.

It certainly was cold today. A high of around 18 degrees and a low of 1 for me here in Netcong NJ while places toward the city averaged about 10 degrees during the overnight hours. With all this cold air in place you wonder where the snow is. Well, I'll tell you...

For all of northern New Jersey snow should begin to fall during the day tomorrow and some places, depending on how far west, and elevation will play a key role. Eventually everyone will go over to sleet/freezing rain and most of us will end as some plain rain, but not all.
The models show warmer air coming into the picture but right now outside my house its 16 and it seems unlikely that all this cold air is going to leave anytime soon. Cold air will dam up against the Appalachian mountains and provided a nasty ice storm for parts of Warren, Sussex, Morris, and western Passaic, in fact schools closing on Wednesday could be a possibilty in those areas. Areas farther east toward Kean university for example will warm up much faster and accumulations will be little if any. Here is the NAM model on the storm, don't be fooled, the warm air is only aloft. 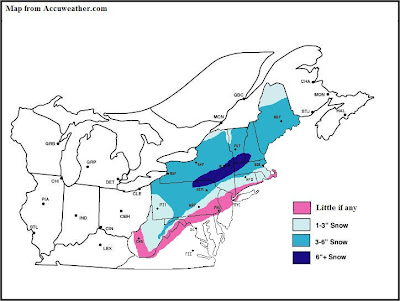 Posted by Darren Milliron at 4:57 PM No comments:

Rest of the season looks bad, THEN!!??

Since my post on January 21st we have had little in the way of snow. I simply have not made any posts because there was nothing to post about, to tell you the truth the groundhogs that saw their shadow may have been wrong. The models keep showing some snow storms but the NAO stays highly positive and that makes me not believe it. If the NAO goes negative I can say for sure that a storm is coming, it always happens. In the long range all I see is more rain and more ice, but no snow.

Well whats doing this Darren? A whole list of things but not global warming. The AMO, and NAO are part of the cause but so is the la nina out in the pacific. I think Mountain Creek in Vernon could be in trouble in trouble with losing snow. The next two week will be mild and rainy, until... Yes, I see a bright future ahead. The la nina weaken, the NAO goes negative(has its strongest influence in March), and the pole vortex comes down out of siberia. This will happen between the 15-20th of February and from then one till the end of March I see a very cold and snowy pattern. As for April, a snow event may seem a good bet for the first week! If Mountain Creek plays their cards right they could be open for the first week in April, but from then on, its spring...