Sorry it's a late but this was not easy! 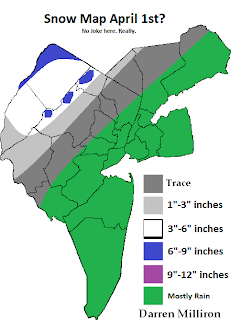 The higher elevations currently have moderate to heavy snow right now and it will continue till tomorrow morning. Unfortunately it looks like the storm won't bring as much total precip as originally though so totals in most areas will not be to big of a deal. Still one heck of an April fools joke...
Posted by Darren Milliron at 7:13 PM No comments:

When I started the winters revenge blogs 11 days ago I knew we were going back into a snowy and cold pattern but nothing like this. Last week NW Jersey added up 6"-15" inches of snow and I still have 3.5" on the ground today! That tells you that it's been very cold for March snow to stick around this long, it's almost April for crying out loud! Now we are going to add more, and possible A LOT more. The tanking of the NAO is to blame.

Let's look at all the models at Fridays storm system.
Euro: 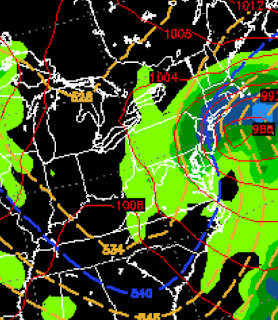 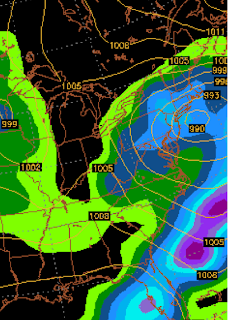 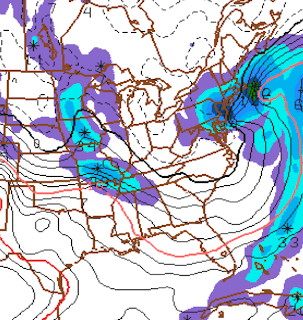 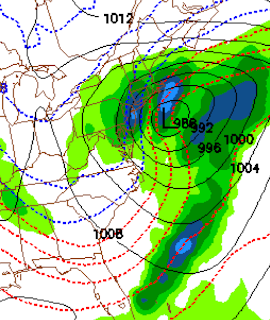 I think I have made my point. A storm is coming up the coast and it's seen on every model except the NAM. Currently I'm waiting for the 00z NAM to come out to see if it has changed to come in line with every other model.
The problem with this storm is that it needs to pass through the "key hole", a track where it doesn't bring us too much rain yet not to far out to sea to bring us little snow. I think this will happen and that means most of NW Jersey will get significant snow accumulations. The higher up you go, the more you will get.
Right away we should look at the precip type, and we will do that using a sounding. 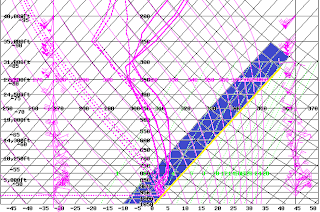 The yellow line is the freezing mark and the blue is the cold air. The long pink lines are the temperature and dew point and both remain below freezing in the entire air column all the way to the surface for all hours of the event except the first few hours of light precip, which may fall as rain. We just determined that this is a mostly SNOW event! Let's figure 10" inches of snow per 1" inch of liquid because the ground did refreeze and it's snow covered still in most areas.
Time to look at total QPF, remember we have 10:1 ratios. 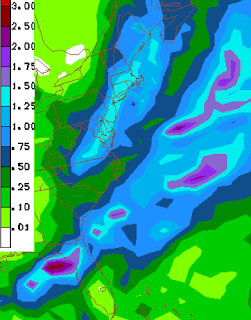 With around an inch of liquid forecasted you do the math...
Check back tomorrow for my preliminary snow map and update on the situation. By then the exact track should be determined and snowfall amounts can be forecasted.
Posted by Darren Milliron at 10:00 PM No comments:

I really cannot believe this pattern we are going into. North west Jersey has gotten 6"-15" of snow this past week and it looks likely that next week will bring even more! This is off the European model for Wednesday: 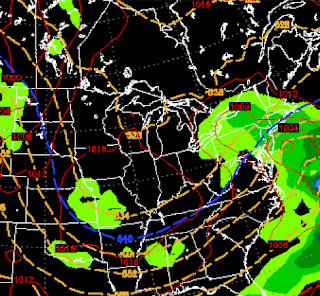 This looks like it could bring a few inches to the area and there is a possible late week storm threat that could really put down the snow across the whole northeast.
For those of you who want spring soon (me included), it's not coming. There is strong reason to believe that this April might be one of the top 10 coldest since records have been kept. Along with the cold is the constant threat of snowstorms, we aren't out of the water till May. As I look out my window now I have 6.5" inches of snow still on the ground and today's daytime high only reached 31 degrees. The coldest spring day I can remember while the sun was shinning bright!
Keep checking back in, next week could be more interesting than last.
Posted by Darren Milliron at 4:13 PM No comments:

Well winter is back, again. The last system brought some "decent" snowfall to the higher elevations with 4.7" in Wantage, 3.8" in Lake Hopatcong, and 2.8" in Randolph. Places in lower elevations received less like Newton with 1.8". Season totals across NW Jersey are around 50" with more toward the eastern sections and we should break 60" on average by the time the snow season is over with.
Let's talk about tomorrow system. First off elevation will be KEY in this storm as the surface temperatures will be too warm to support all snow in places below 500 feet. Other than the surface conditions the upper air looks great to support wintry precipitation. Take a look at this sounding off the 12z NAM: 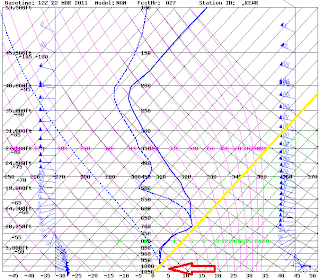 The yellow shows the freezing line and the blue lines (temperature and dew point) remain below that point except at the surface. This is for Newark and indicates snow and rain making it difficult to accumulate. Heavy bands of precip will help to cool the surface layer for brief periods and allow snow to accumulate in those areas. Now let's look at the sounding for Sussex County: 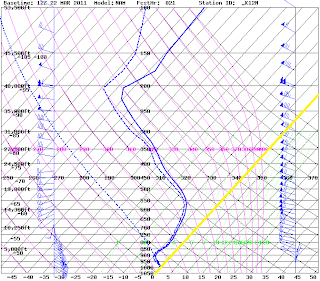 NOW this is an all snow sounding for the whole event since the temp remains below freezing all the way to the surface.
Since we confirmed snow for the entire event let's check out how much precipitation will fall inliquid form. It looks to be around an inch for the area, which typically equals 10 inches of snow in the winter but it's spring. So figure 5"-8" in the areas that remain at or below freezing. 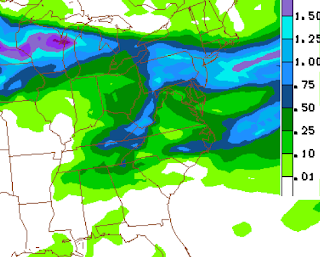 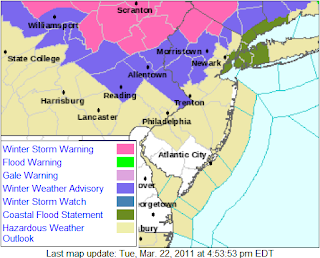 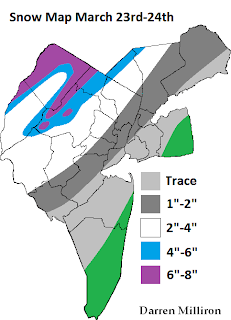 It going to be a decent storm by March standards. Of course if you have any questions or comments you can comment below, email me, or find me on facebook. Have a safe commute tomorrow!
P.S. Next snowstorm is already on the maps for early week: 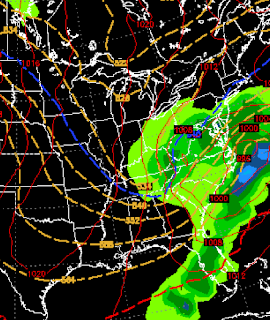 Posted by Darren Milliron at 5:32 PM No comments: 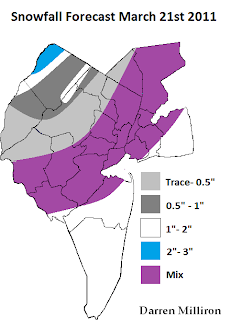 Posted by Darren Milliron at 7:52 PM No comments:

I'm going to be honest. The next week and a half look more like mid February to me on the models and that means multiple snow events and plenty of arctic air, not a polar air massive. The first event on Monday night will start as snow, then go to sleet, and eventually end as a light rain but not before several inches of wintry precipitation accumulate. Higher elevations will likely get the most.
(NAM for Monday night) 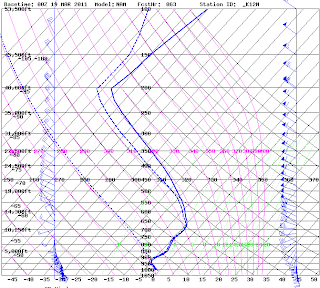 The second storm is possible Wednesday-Thursday which could bring significant snowfall to the area. With the snow comes temperatures that might not exceed freezing which is uncommon for the spring season. The euro below shows a huge snowstorm for the Mid-Atlantic and northeast as well as the DGEX: 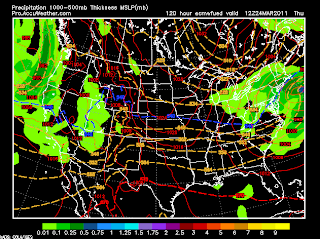 Looks like just because spring starts tomorrow doesn't mean winter is over. Well actually it does, but you get the idea...
Posted by Darren Milliron at 11:25 PM No comments:

This weather has everyone fooled. It's still winter for a few more days and it's going to come back with full force (by March standards). The threat looms for an east coast snowstorm late next week accompanied by noticeable temperature drop.
More information in the next few days as the situation becomes clearer.
Posted by Darren Milliron at 9:23 PM No comments:

Snow cover is gone in most areas except north facing terrain and areas in shade. Local resorts have a decent stock pile of snow which should last for the coming weeks, but the high March sun will rapidly melt most of it in the next 3-4 weeks. March is typically the snowiest month for higher elevations above 800 feet in NW Jersey while February is the snowiest for lower areas. Unfortunately this March does not look favorable for much snow anywhere in the region, although we can't turn our heads just yet.
Here is a look at the storm for Sunday: (Not wintry by any means) 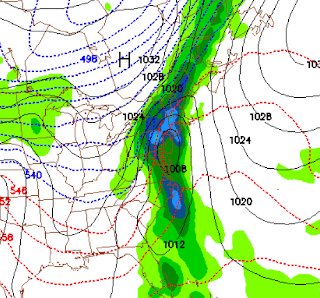 After a solid dump of rain again this month another storm will unfold by weeks end, this one could be a candidate for higher elevation snow but it's way to early to really tell. 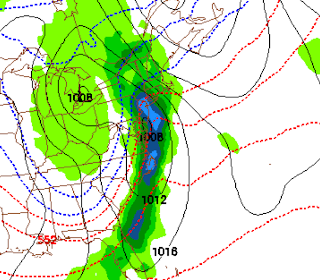 Now I do think the ski and snowboard season could last into late March this year. Reason is because it looks like a nice weather pattern is shaping up that would keep things cold (by spring standards) and could it bring some snow? Northwest Jersey is only around average for snowfall this season with totals around 49" and last year many places topped 80". Actually our season total this year is equal to what we received last February ALONE!
Spring is just about here so get your last turns in before your hitting yourself in the head come April!
Posted by Darren Milliron at 4:33 PM No comments: