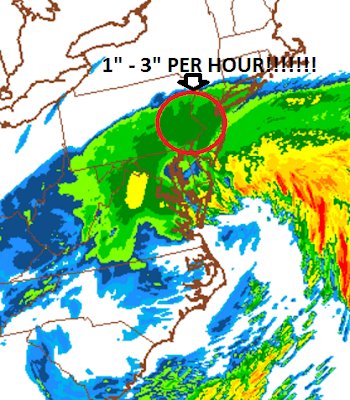 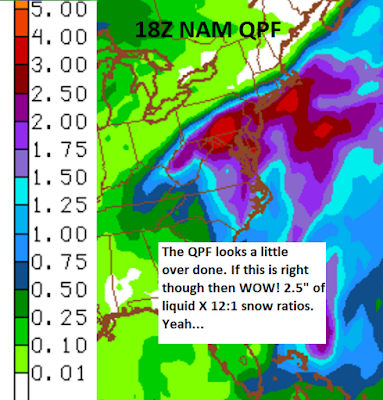 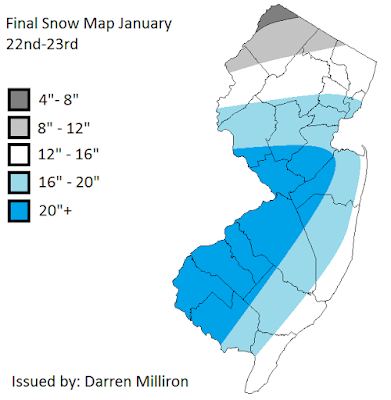 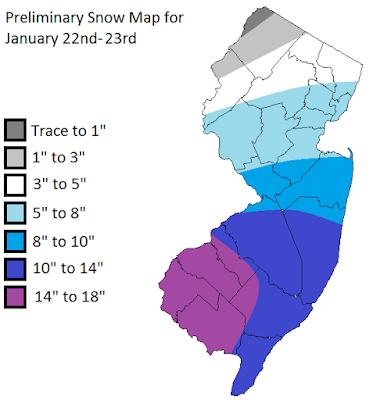 Sorry for lack of quality with the map. I'm just testing out how to update from my phone when I'm not around. It came out okay, I guess? 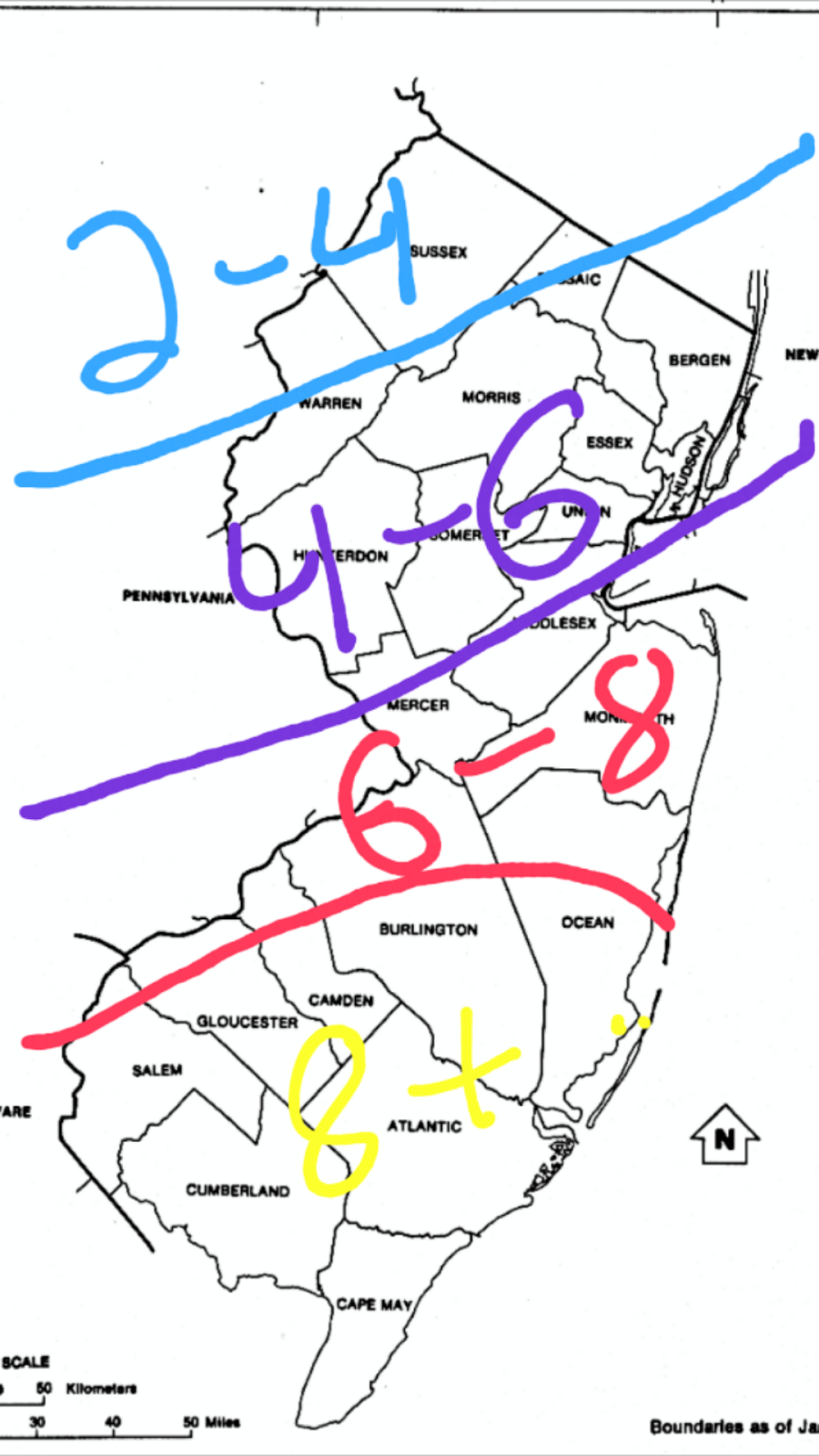 The point is that this rain will change to snow around mid night and it's going to come down hard. Latest model data suggests these numbers are to low but I don't know if I believe it. It just a snow event. We are so use to this by now and life will go on as usual. Have a good night and be safe.

We have a very complicated storm system(s) coming our way this week. This forecast is going to try and pin point the timeline of events, but there is so much going on that I will have to update again by tomorrow or Wednesday.

Let's start with Tuesday. A storm system will be coming up from the southwest and run into the cold air mass that's been stuck over the region. The precipitation will start as all snow in the afternoon and depending how much QPF can fall in the first few hours will dictate how much snow falls. At this point I see a varying amount of 1" to as much as 3" in steadier bands before a change over to sleet by Tuesday night. Sleet could even accumulate up to 1" before another change over begins. 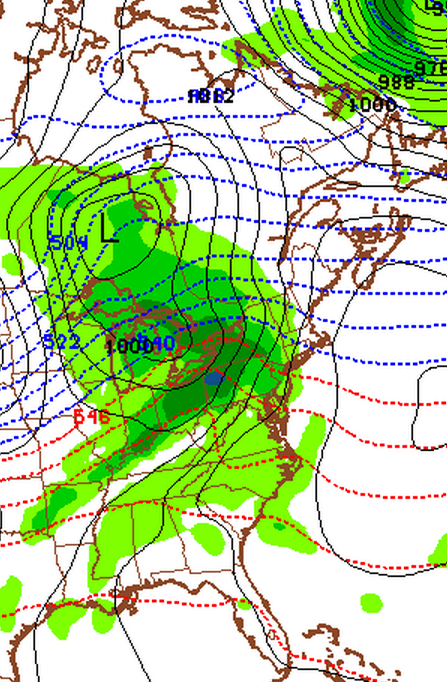 On the models this storm looks to be primarily rain. However when you look at the soundings you notice a cold wedge near the surface which keeps the frozen precipitation around A LOT longer than the TV News channels are telling you. (See Image Below)

The image above shows a scene that somewhat disturbing. Nearly 0.25" of liquid falls in the 6 hour time frame of this sounding with below freezing temperatures at the surface. This sets NW Jersey up for MAJOR icing of sleet to freezing rain. Snow melts pretty easy on contact with roads but sleet pellets tend to cover roadways fast and are not easy to plow away and melt with salt. Wednesday morning is going to be rough...

Eventually we do rise above freezing during the afternoon on Wednesday, but at that point the main bulk of the precipitation shield has moved to our northeast. During this time temperatures get into the upper 30's ( I do not agree with temperature forecasts into the middle 40's) and some patchy drizzle moves through the area. This is good because with so much snow on the ground and frozen lakes and rivers a major rain event could be catastrophic for low lying areas. Not only flooding but ice jam risk right now is very high and we need a slow melt process through March to safely get rid of the danger. (Image below of the "warm sector" of the storm) 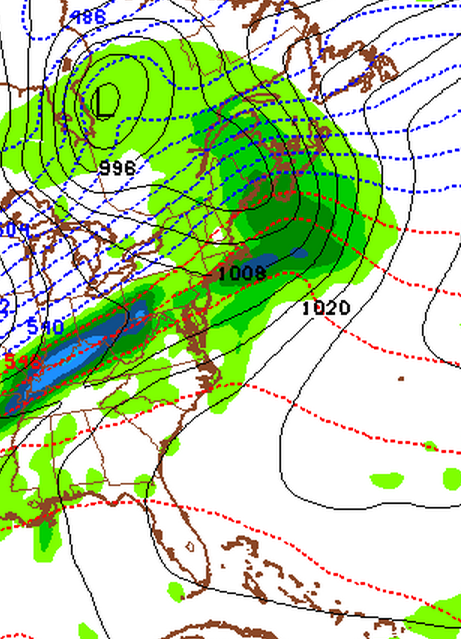 The next step in this system is the cold front, which moves through WITHOUT any pre-frontal moisture. Instead the precipitation trails the cold air. The image below shows when the front is moving through. The sounding shows the dew point temperature becoming increasing dry and the temperature just above freezing through the column. All it will take is some precipitation to fall and bring the temperatures below 32 F to support ALL SNOW again to the surface. 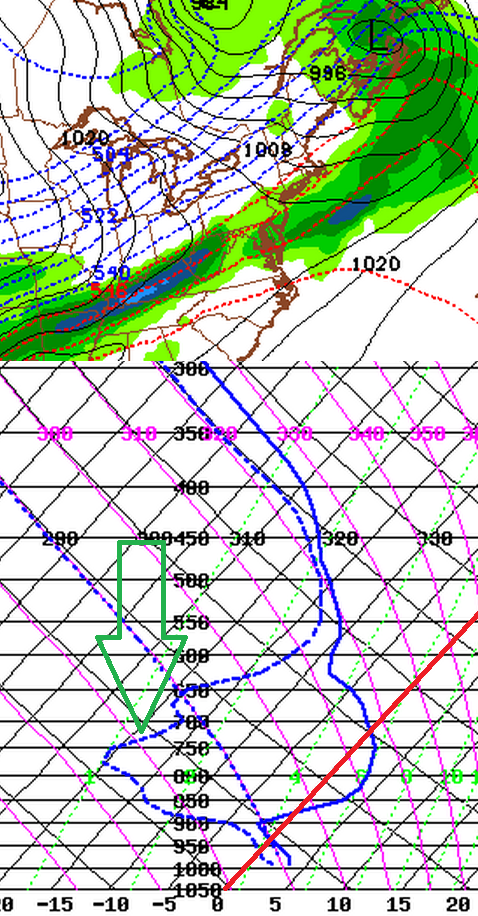 This is when it gets interesting. Now that the profile of the atmosphere supports all snow we still have to deal with the FRONTAL moisture, which will be snow. How much is still up for question, but the latest NAM say A LOT...

Now there is a lot of weather between now and Thursday but just know that significant snowfall is a strong possibility but for now my main focus is the ice for Tuesday night into Wednesday. Be safe everyone and check back for updates.


Posted by Darren Milliron at 9:55 PM No comments:

Sorry for the lack of posts. I'm doing this from my phone at jay peak Vermont. I'll be back blogging next week. I'm heading out into the glades :) 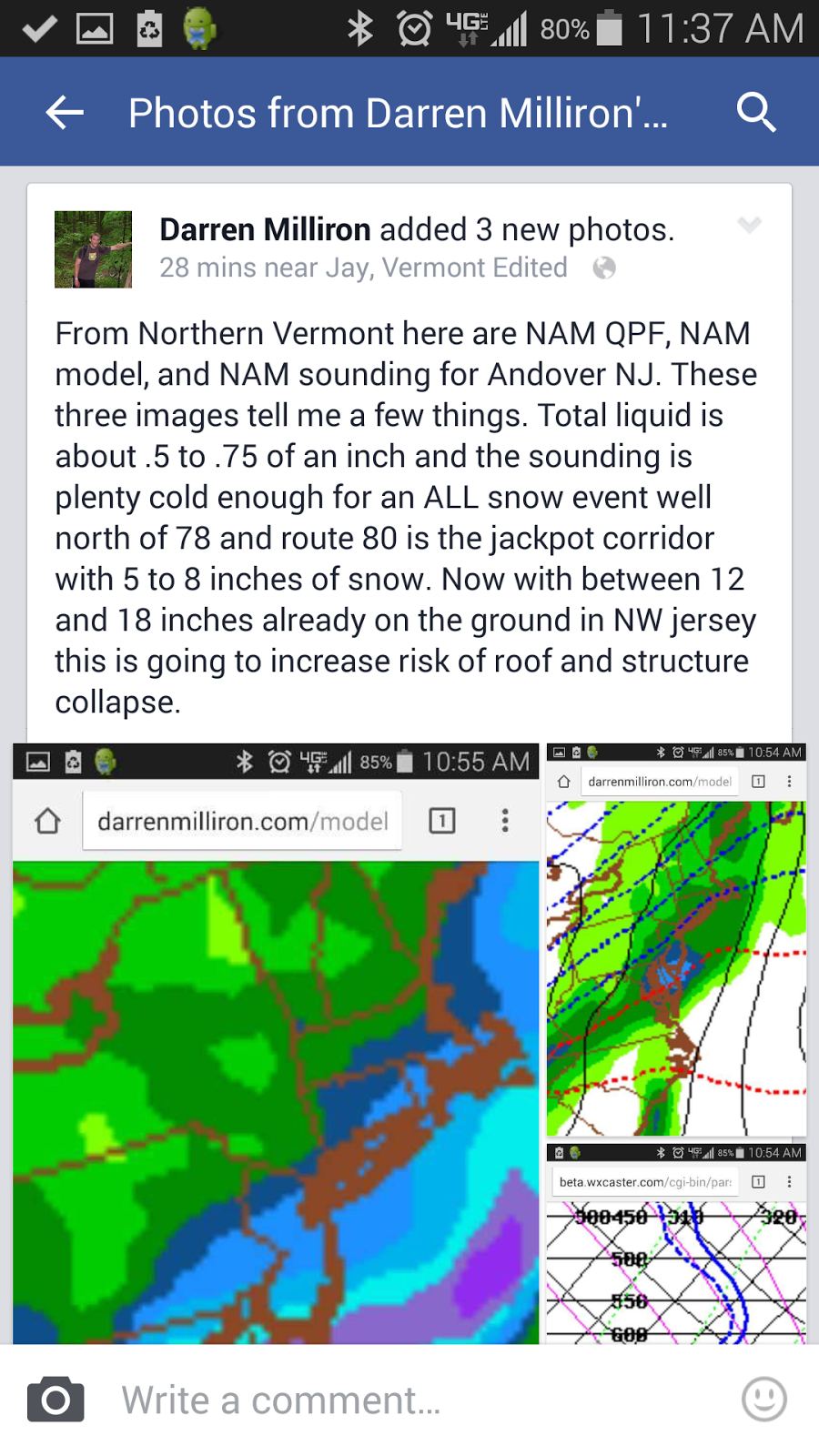 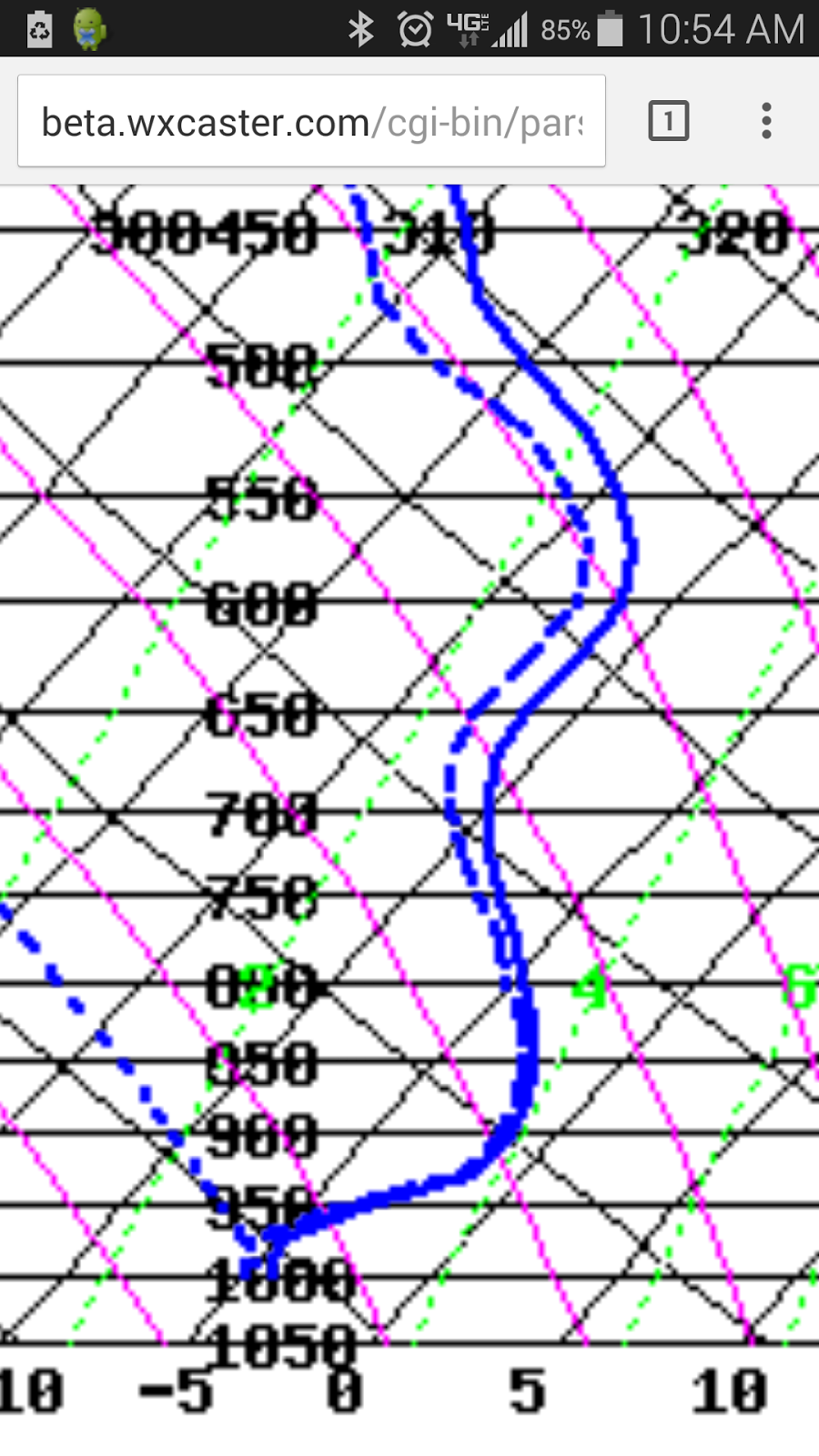 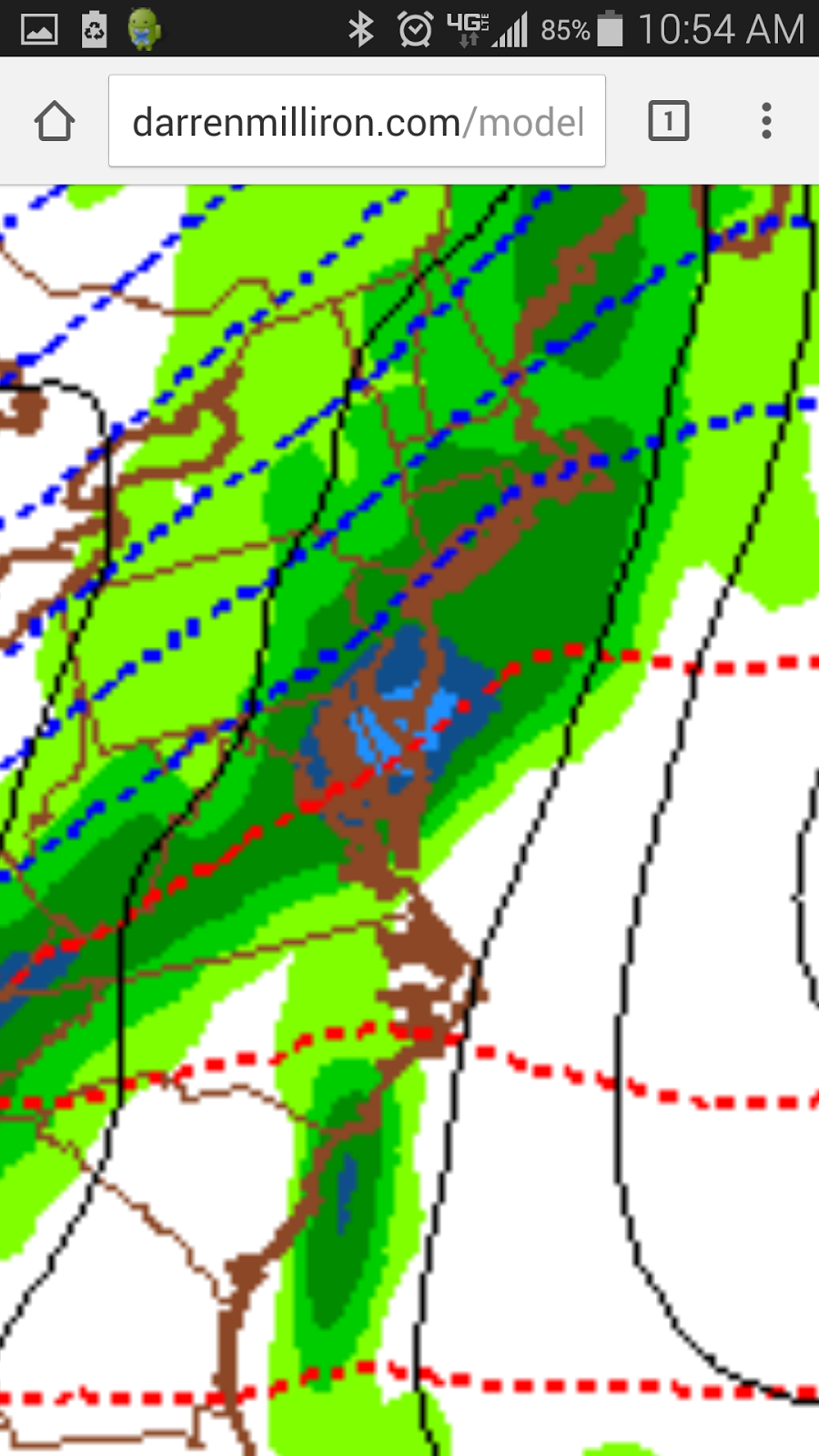 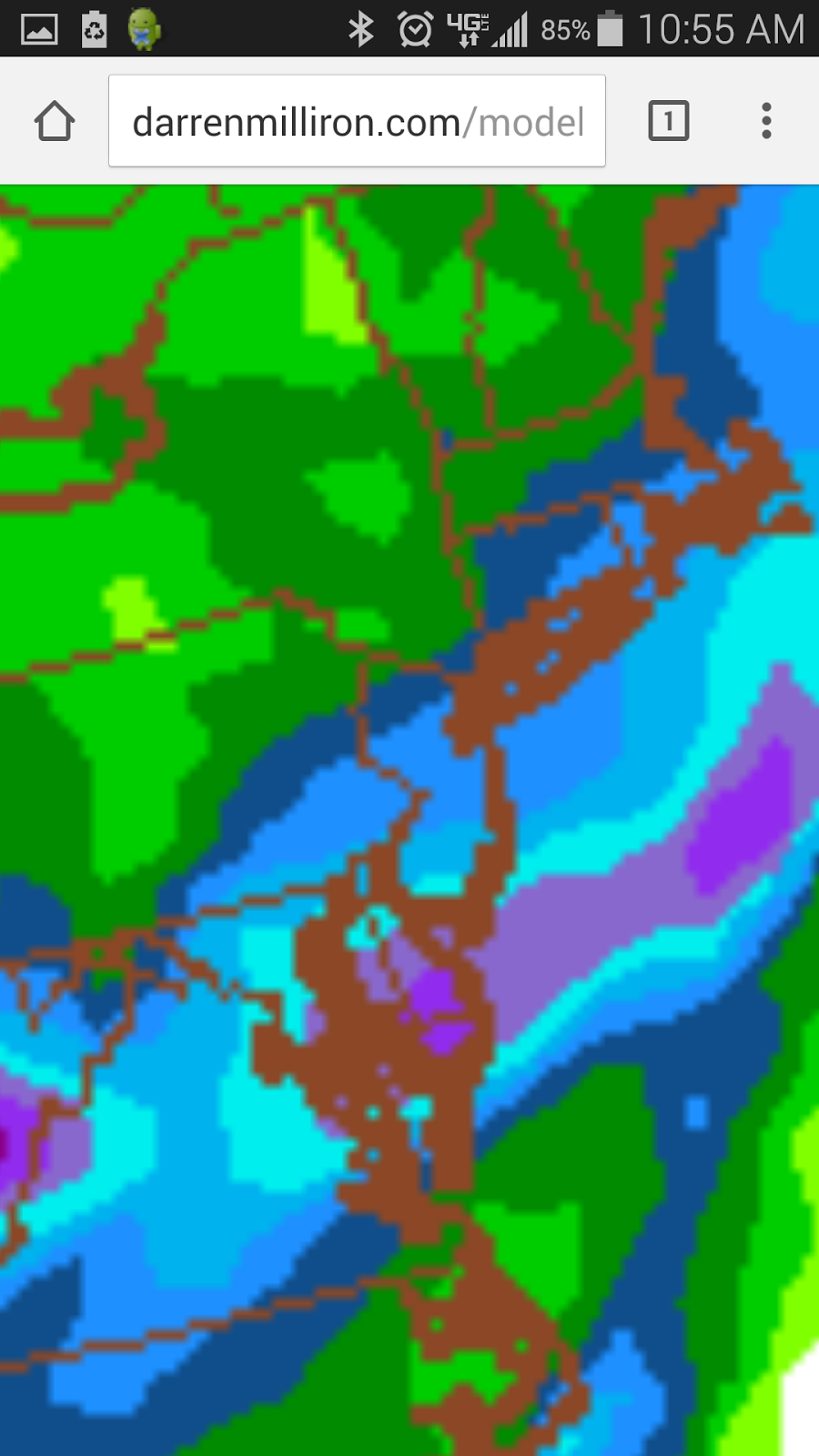 Posted by Darren Milliron at 11:41 AM No comments:

We did manage to get about 2 to 3 inches of snow this weekend. Not exactly the biggest event but still it was something to add to our deep snow pack. Now the extreme cold is here and it's going to stay, and it's going to stay awhile. I don't see much relief in the next week honestly besides some days approaching the 20's for highs. That should feel like spring to us!

First snow event this week is for Monday night into Tuesday afternoon. Honestly this isn't going to have a huge effect on us in northern NJ, but still it's going to require us to break out the shovels again. The latest NAM is showing the total QPF for the event which is around 0.15" to 0.25". With temperatures in the teens for highs this means high ratio ratio snowfall on the order of 15:1 to 20:1. In my mind it's about a 2 to 5 inch event with more the further south you go. 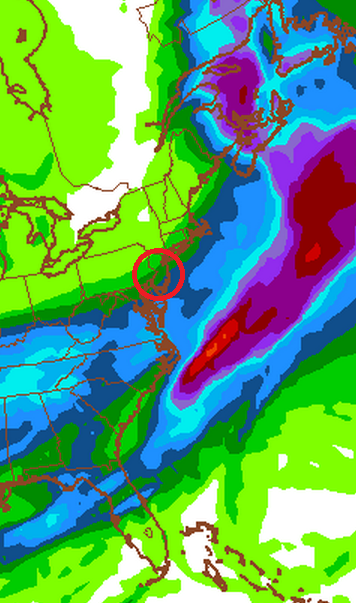 Here is my first snow map for the event: 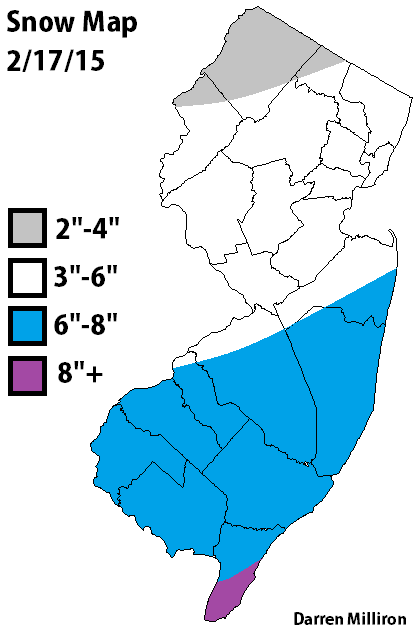 Beyond this system there are multiple other snow chances this week, some look like passing snow showers while others could bring some accumulation. Right now it's not clear whats going to come out of these systems and for now focus is on the storm for Monday night into Tuesday.

Posted by Darren Milliron at 8:10 AM No comments:

All that hype with this Sun-Tues storm on TV had people frightened. I never jumped on board with this storm and even more forecast of a couple inches was to high! Most places just got a light coating of sleet and some snow flakes mixed in. It really wasn't all that bad today in NJ because all the precipitation went north of us, but there are more storms on the horizon...

First off a clipper system will be heading our way for Thursday and a secondary low will form off the coast. Right now it seems like the storm will intensify too late for NJ to see substantial snowfall, however New England could get another foot.

There still is some time to see how this storm evolves on the models but to me this looks like a minor event for NW Jersey for the time being. By the weekend we could be looking at another potential storm. More updates in coming days... 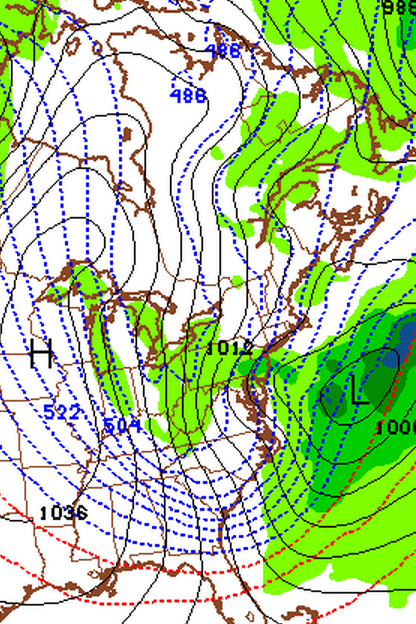 Posted by Darren Milliron at 7:58 PM No comments: