Icecap records are being crushed!

I realize that I haven't been posting very often and thats because, well, I must admit that I lose interest when summer time comes in the weather. Yeah, severe weather and hurricanes don't really get me into weather mode what really does is October-April when the NAO hits a negative phase and coastal developement of snowstorms becomes possible. But I am also big on the climate change topic and something of great interest has happened, something big...

We all hear stories how the arctic is losing ice to global warming and is slowing disappearing, well it is on a downward trend these past couple of decades but I do believe that downward trend is going to reverse as the years go on. In fact last September of 2007 the arctic sea ice hit the record low extent since records began back in the late 1970's. I can almost bet that everyone has heard of that but did you ever hear that it made the greatest come back in recorded history? That's right it went from the record low extent to almost near normal in just a few months time, below is the chart and you can click for a bigger image. 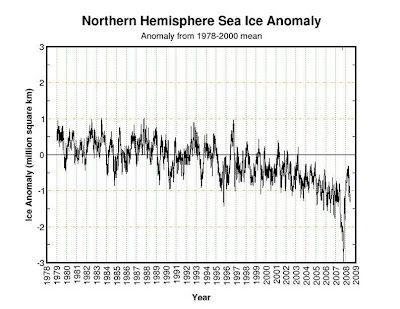 Besides the arctic breaking these records the antarctic is far more impressive and is breaking records for the greatest ice extent on a regular basis. In September of 2007 when the arctic hit its record low ice extent the opposite went on at the south pole. It hit the all time record and completely crushed the old record. Ok and if that isn't enough for you, during the south poles summer (our winter) while the sea ice should hit it's lowest extent of the year it hit its highest low ice extent of all time at 1 million square km above average. If it hasn't sunk into your head look at the chart below. It is updated for June 22 and the ice extent is growing and already reached it's minimum level for the year. The minimum level for this year beats most of the maximum's of the past 30 years! Just think, the lowest level of this year almost broke the old maximum ice extent set before the 2007 level. The point is, the antarctic sea ice has been breaking records every single month, every day, every hour, every minute, and every second for the past year. Global warming should be global, don't you think? 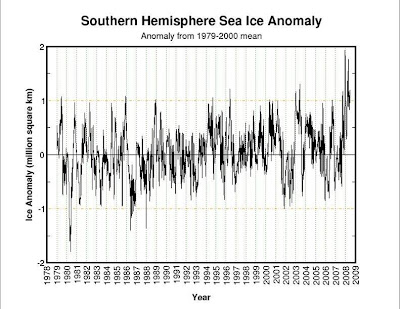 P.S. Sorry about any spelling mistakes or anything, I am sick right now and not feeling up to much revisions.
Posted by Darren Milliron at 10:03 AM No comments:

Is the world cooling?

It's been awhile since I wrote up a blog and there is good reason, we could say that it's been very boring weather wise and no shocking glo-bull warming stories or is there? There still has not been any sunspots and it's having an effect on the world already. Antarctica which just broke it's record ice extent last year looks like its going to top itself this year. Speaking of this year here are my May stats for Netcong:


May ended up 3.21 degrees below average and it wasn't just here, it was the country as whole almost. Let check out the other months:

Ok so the year is still on the warm side but only for the southeast up the east coast, otherwise the rest of the country is below average and the world has now fallen 1 degree in average temperature since 1998. Undoing that 0.6 degrees of warming that Gore is always complaining about.

Posted by Darren Milliron at 4:39 PM No comments: