The storm will move in tonight and last through the day tomorrow. It will be an all rain event and most snow cover will be washed away. It's a sad thing, but a clipper system this weekend could bring us a little in the way of some snow. By the beginning of next week another storm will cut up through the great lakes and that is really going to hurt the snow base at the local resorts. Trails counts will fall drastically. I will post more updates as more information comes in.
Posted by Darren Milliron at 3:30 PM No comments:

Let's start right off with the QPF for the next 36 hours. Just look at the totals over the mountain ridges in Pennsylvania. Over 3 inches of liquid, that's impressive! 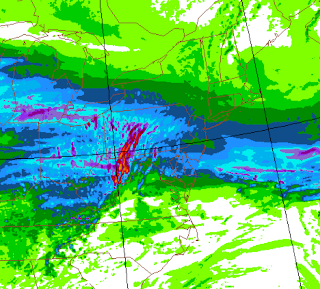 For us here in NW Jersey the QPF is between 0.50"-0.75", and yes it will be all in snow form. National Weather Service is calling for sleet to mix in, but I just don't see that happening. In fact I have no idea where they even got the idea of mixing. Soundings like this one below for Sussex Airport (KFWN) tell us that the column of air will be below freezing all the way down to the surface. 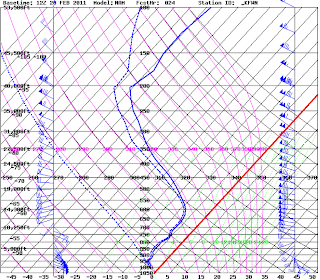 To my knowledge this indicates all snow, and I'll put my money down on that! The liquid equivalent (QPF) suggests a snowstorm along the magnitude of 5"-8" but I'm going to be conservative with 3"-6". 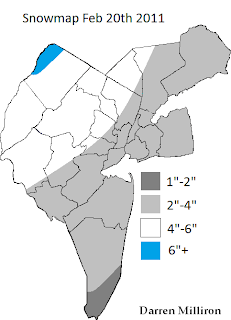 P.S. The potential still looms for another storm by Friday. Of course the precipitation type depends on the exact track of the system. 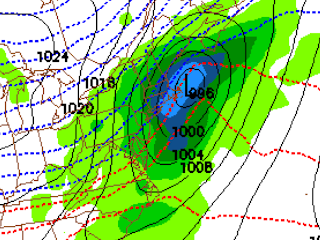 Posted by Darren Milliron at 6:05 PM No comments:

In my last blog I promised as soon as the models showed a change in the path of the storm I would let you know. Well the 00z NAM looks very interesting to say the least. If this model run turns out to be correct than all the snow that melted could be replaced by Tuesday. I want to see more models and more runs before I make any final call. 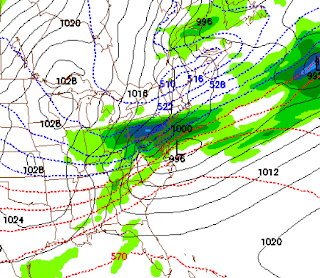 Ok, today was the last day of the warm spell and now the cold air will make a come back. A lot of snow cover was taken out in this melt down but I still 4.25" on the south side of my house and 9" on the north side (at 1,000 feet). Lower elevations and south facing terrain have lost snow cover already, and now people can once again see their lawns. 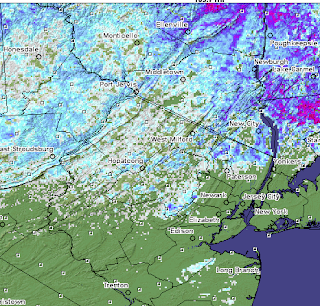 There is a storm on the way for the beginning of the week (double shot), but it's not looking very favorable on the models for NW Jersey right now. The first part rolls through Monday morning starting as snow to mix to rain with very little accumulation if any. The second piece comes through with much colder air but the models bring it right to our south producing a nice dump of snow for south Jersey.
Part 1: 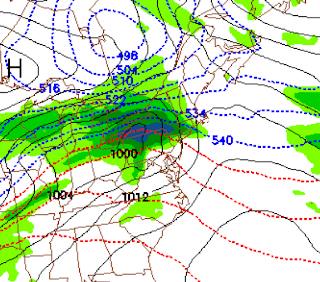 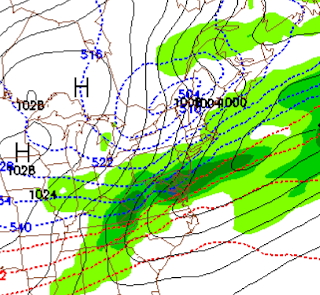 Now keep in the mind the event is still 3 to 4 days out and thats plenty time for the models to change (as we have seen most of this year). Just keep checking back in. The minute things switch I'll be the first to let you know.
Little heads up, here a map for the end of the week. 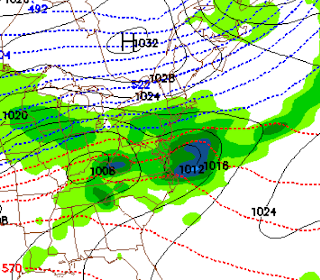 It's still way to far out to decide track, precipitation type, and the specifics of the event. But there will be a late week storm, and I have a very close eye on this one.
Posted by Darren Milliron at 6:33 PM No comments:

It's been two weeks since our last measurable snowfall and even with the "warm" temperatures most the area still has decent snow cover. As of 7:00 p.m. tonight I still have 9" inches of snow in my backyard and even more in my front yard on the north side of the property. I would guess that another 2" will melt tomorrow and 3"-4" on Friday, after that cold air returns for the weekend and snow cover will remain in places over 500 feet in elevation and also on north facing terrain.
In my last post I talked about the arctic oscillation (AO) switched back to positive and that is what has lead to this warming spell. I watch stratospheric warming very carefully now and I notice something happening over the pole. Its negative once again. 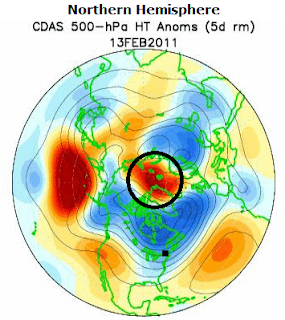 The black circle indicates a strengthening warming event in the stratosphere over the arctic.The perfect place for it as the cold air at the surface gets displaced to lower latitudes. Saturday will bring change as the blocking pattern over the pole begins to affect the current pattern. How you may ask? Take a look at the GFS for Monday night into Tuesday: 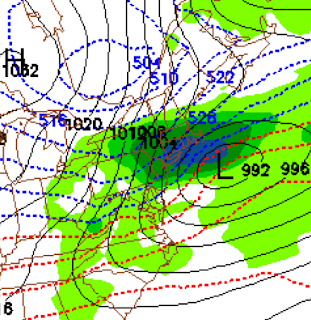 Keep checking back as I narrow down the specifics of the event. Hopefully we can get a good dump of snow out of this.
Posted by Darren Milliron at 7:16 PM No comments:

Now that all the main drivers that started winter off so good have shifted phases the typical La Nina season is showing it's face. This means long periods of cold dry air with storms going out to sea, or storms tracking up the spine of the Appalachians bringing us snow to mix to rain. And this is the new pattern we are in, a pattern that only typically brings average snowfall to the region.

Above you can the current stratospheric temperatures over the past month. It starts off with warming over the pole then snaps to a cold phase over that same area. That was the end of our crazy weather pattern but there are hints that another warming event may send the AO and NAO back into negative territory. With both these blocking patterns in a positive phase the winter snow season will cease to exist.
There aren't any future up coming snow events in sight, just some cold air with storms being sent out to sea. We can take this time to relax and just get a break from shoveling and all the stress that goes with forecasting major winter events. Remember winter is only half way over...
Posted by Darren Milliron at 10:41 PM No comments:

Well todays storm took a much warmer path than the models were showing originally yesterday, which isn't a surprise to me. All we got was more freezing rain and sleet which is typical of La Nina and I think this is what most of the winter will be like from here on out. Of course we will get snow every so often, but the persistent dumps of snow and prolonged cold spells are thing of the past.
I originally forecasted a season where the snowfall would be slightly below average and the temperatures slightly colder than average. I still think by the end of the season temperatures will moderate and end up about where I though it would. Now most areas in NW Jersey is around 40" for the season, and the average is about 55" which I believe we will surpass.
Now that the snowy pattern is coming to an end, welcome to La Nina... Ice, Ice, and more Ice.
Posted by Darren Milliron at 10:39 AM No comments:

As I look out my window I see a glacier, a 15"-18" snowpack that is so solid you can walk on top and not even make a footprint. That means there is a lot of water built up and melting will be a slow process, but can be accelerated by heavy rains. It doesn't look like we will be getting a heavy rain event anytime soon but we may see some rain on Saturday. It may start as snow then go to rain then back to snow at the end, with a total near 1"-2". But if we have a slightly colder storm then totals could quickly approach 4" and opposite for a warmer event. Just a few hours out the models are still all over the place with the system, so I may need to do an update tonight at 11:00 pm (with snow map).
Map for February 5th 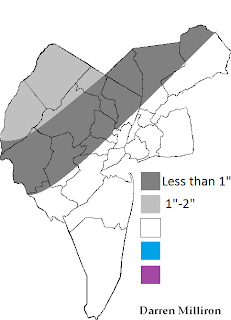 Let's talk about next week now. First shot of snow is Tuesday when the arctic front moves through, that won't bring much but some areas that see snow squalls could pick up a quick 1"-2". Following the front is some of the coldest air this season and the risk of major northeast snowstorm by Thursday.

Right now this storm is way to far out to even decide the track. It could cut through the mountains bringing us another mix or go way out to sea missing us completely. But there is a middle zone that could bring us a massive blizzard.
Tip of the day:
Here is a picture of the corner of my house: 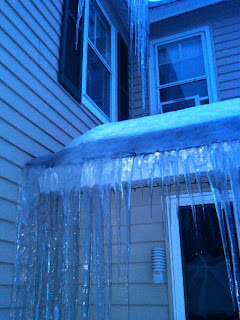 I wanted to show this picture and remind everyone that this is a dangerous situation. Thousands of pounds of ice falling on a warmer day (tomorrow) can fatally injure someone. Be aware of your surroundings, during the next two days these massive structures will be giving way to gravity!
Posted by Darren Milliron at 3:32 PM No comments:

This storm system could be a sign that our pattern is breaking and could be changing back to the normal La Nina ways. This storm system is a classic example of what La Nina seasons typically bring. The AO and NAO have gone positive now, PNA is heading negative, and no sign of any major stratospheric warming events is apparent. Nothing now is keeping storm systems from riding up through the lakes and allowing warmer weather to come with it across the east.
The models are now tracking the storm much further to the north than yesterday, meaning snow/sleet accumulations are going to be much less and now freezing rain is more of a threat. Most areas have already had about half of their accumulation for the total event so it's less than anticipated. 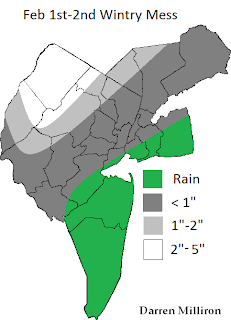 The map is the two day total of snow and sleet accumulation with the higher amounts the further north you go. Now, the worst part of tomorrow is the freezing rain. All places in the snow contours will see freezing rain with the worst of it across the northern counties from Sussex to Bergen. Some of those areas can see over a half inch of ice, an ice skating rink has three quarters of an inch of ice. So literally it will be a skating rink.
After this sloppy mess expect talk of another storm for Friday night into Saturday, but the precipitation type for that is still unknown. As of now it looks wintry for most areas.
Posted by Darren Milliron at 6:17 PM No comments: