Batten Down The Hatches... (Snow Map)

Let's talk snow!? First off I am much more worried about this storm than any others I have personally experienced. And that's because the leaves have not fallen off the trees yet. In fact some urban areas with exotic and invasive tree species still have green! It only takes around 2"-3" of snow to take down a tree with leaves. Now what if you get 8"-14"? And some models even suggest up to 20" in some locals (highest terrain). This is a major problem, and power outages are not just likely but certain. Here aresome tips:
-Take down any outdoor screen houses/umbrellas
-Don't park under tree limbs!
-Keep the space heater ready, if power goes out so does heat!
-If you need to keep food items cold outside works. Unless a bear comes...
-No matter your age, take breaks while shoveling. This snow is often called "cardiac snow".
-Do not walk/stand under stressed trees with foliage
-Above all, don't under estimate the storm just because it's October...
Elevation will still play a major role in this storm, but so does the exact track. I'm going to take the average liquid equivalent of all models and use that to draw my map while keeping terrain into consideration. Let's look atthe QPF maps:
NAM: (1.5"-2.00") 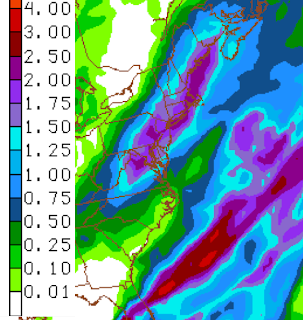 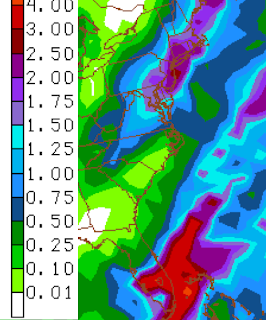 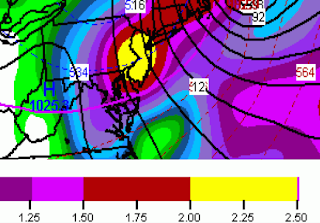 Now that we have a good idea of precip amounts let's look at the sounding: 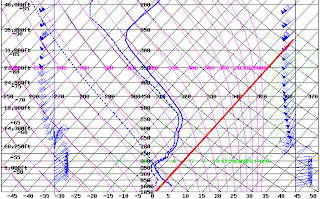 Above is a vertical profile of the atmosphere and the red link represent freezing. The long blue line are temp and dew point. When they come close to each other it means the air is saturated, in this case it's not clouds but HEAVY precip. If you look closely the lowest level is above freezing to start the storm. This means areas below 1,000 feet will start off as rain. Above that expect all snow from the beginning. To those of you below 1,000 don't fear, the rain falling will actually cool the surface quickly and change it over to snow. It's better known as evaporational cooling.
Let's progress to the height of the storm: 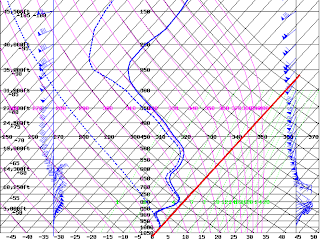 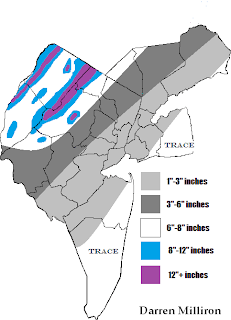 -Also expect gusty winds out of NE
-Thunder snow is being forecasted
-White out conditions at times
Be safe and stay classy...
P.S. What do you think of this new format for snow map blogs? Does it help with understanding the event? Comment or send email to millirod@kean.edu
Posted by Darren Milliron at 6:46 PM No comments:

Well, the chances of it snowing look pretty good for the area. Actually, I would say it's almost certain at this point. The european model was the first to catch onto the system and now most operational models are showing the same scenario. The only question is how much snow will fall?
Let's take a look at the latest GFS: 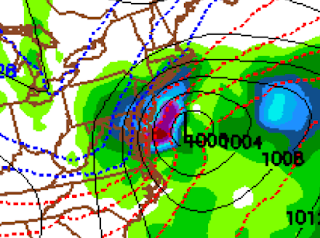 Essentially all models are showing this now with the exception of the NAM. It will probably catch on by the 18z run time. Basically we just need to know how much liquid precipitation is forecast and translate that into snowfall amounts. The GFS forecasts around an inch liquid for Sussex County, so that would mean around 4"-10" inches of snow! It's a large range because lower elevations *will* get less snow than the higher terrain because the temperature factor.
Take a look this sounding for Sussex County: 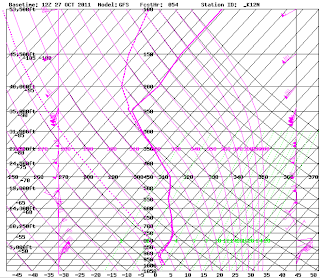 Any forecasts you see of rain/snow/mix are completely inaccurate. This storm will bring all snow to the area with no mixing. Nothing even suggests such a thing so I'm not sure what those forecasts are about. Anyhow, the sounding above shows there will be no warm layer inversion so it's either rain or snow. No sleet or freezing rain thank god! High temperatures forecasted by NWS are in the mid and upper 40's! That's wrong. When the precip falls (especially heavy) it will cool the atmosphere and temps will struggle to rise above 32 degrees in the higher terrain and 35 in valleys!
I still need to make a snow map. It will be out tomorrow.
P.S. It looks the rain today may end as a brief period of snow in some spots around 00z!
Posted by Darren Milliron at 3:09 PM No comments:

Is It Time For Snow Already?

Let's get this straight. Some computer models suggest a storm moves through Thursday and brings our area mostly rain with a potential change over on the back side for parts of Sussex County. Personally I think the precipitation will end just before the cold air advances, essentially only bringing us a chilly rain event. Now currently there are two models that suggest a second system will ride up the coast and throw nearly an inch of liquid precipitation into cold air (this includes the entire state). Let's take a look at these models:
JMA (Japanese Model): 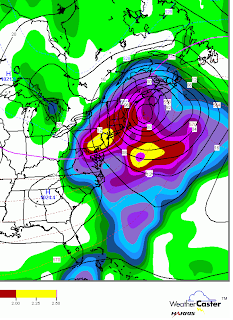 Okay so the model above shows high winds and nearly 20" inches of snow across New Jersey, which I do not believe. This model always has an issue with predicting total QPF (total precip) but the physics in the model seems to be somewhat trustworthy. The blizzard depicted above is not very likely, but it does help support the idea of some kind of snow event.
ECMWF (European Model): 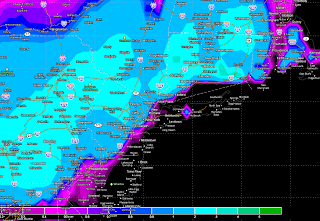 Above is the snowfall forecast for hour 105 and it's only a three hour increment. The total snowfall predicted by the EURO is 6"-10"! This model has been consistent for the past several runs, something that meteorologists look for when analyzing model output. Also the EURO is known for having better physics in the model than most others.
So far no other models have gone to this idea, instead they just pass off the storm off the Mid-Atlantic coast. As of right now it's too far out for making any kind of calls, but check back tomorrow as I will be posting on the very latest model output and give you my personal opinion.
P.S. Winter Forecast should be out by the weekend
Posted by Darren Milliron at 9:30 PM No comments:

First Snowfall of the Season?

Take a quick look at the sounding. It suggests snow Friday morning for NW Jersey and even into the city! Check back later tomorrow. It's time to start blogging :) 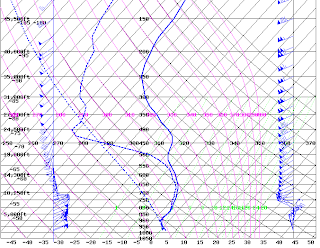 Posted by Darren Milliron at 11:15 PM No comments: 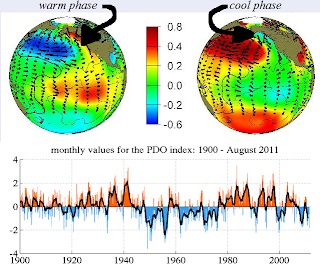 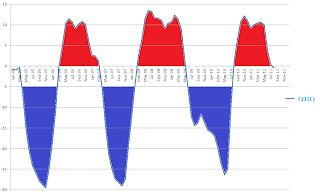 The QBO is basically winds between 10mb-100mb. These winds shift from easterly to westerly every 20 to 36 months. As of August the winds officially became easterly, just like they were in the winter of 2009-2010. Last winter I only expected average snowfall for the region and we went over by about 10"-15". This is because last winters westerly phase of the QBO should have helped to suppress stratospheric warming events. Therefore winter shouldn't have been as bad as 2009-2010, and for NW Jersey it wasn't! I can't say the same for NE Jersey. We have entered a easterly phase of QBO and it means more and stronger strat warming events.
This was only my pre-cast. My official winter forecast will be out later this month. There is a lot to talk about and I couldn't possibly do it in one blog post without putting everyone to sleep. If you ask me, this coming winter might leave last year in the dust...
Posted by Darren Milliron at 8:46 PM 1 comment: