More snow, and then more.

Well, while we are not getting those massive storms that cripple the entire region snowfall for most of Sussex, Warren, Western Morris, and Western Passaic counties are right where it should be for this time of the year if not surplus. We actually range in Sussex county from 21.50"-30.75" for the season. Season average is usually between 50"-70" depending on elevation which means we are right where we should be for being a 1/3 through winter. I have two interesting systems coming up which really get me exicted and I'll explain why.
First storm for Tuesday into Tuesday night is another cold front coming down out of the artic and it seems as if a storm will intensify as it hits the coast. Areas in northwest should remain all snow but the city seems to be a mix of precip with little if any accumulation. It depends when and where it intensifies off the coast and who knows, maybe the city can get a few inches. We just have to wait and see. Here are my guesses: 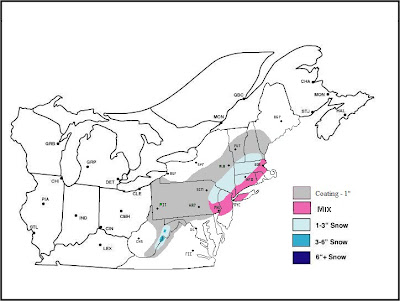 Storm #2 is what I am interested in. It doesn't look impressive because it isn't. It's coming in with and artic blast of air in an already artic air mass. If we get 1/10 -2/10 inch of precip (liquid) with snow ratios 30:1 then that's a good 3-6 inches of very fluffy dry snow. I will post a snowmap on Wednesday to make sure this system will even make it over the mountains. Check it out:

Posted by Darren Milliron at 5:48 PM No comments:

This is an interesting storm. I can see how isolated parts of NC, VA, DE, and Maryland get up to 6 inches. I see just a coating for south Jersey if your lucky. Once again city people, this isn't your storm, again. 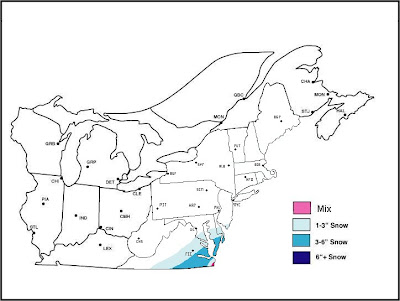 Posted by Darren Milliron at 1:49 PM No comments:

I can see how parts of northern New England get almost 10 inches in isolated areas. And I also see how parts of Northwest Jersey get up to 3 inches of the white stuff. Sorry for you people in the major cities, this once again, isn't your storm. Check it out: 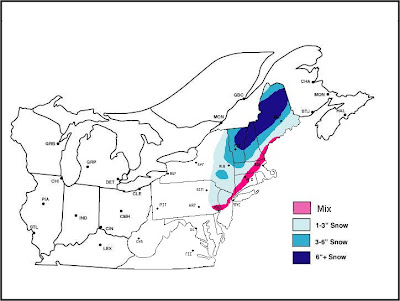 Posted by Darren Milliron at 9:37 PM No comments:

Here is my first guess about the upcoming snowstorm. Tomorrow I will a more accurate and up-to-date map. Check back! 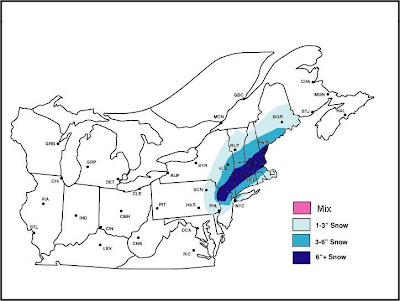 Posted by Darren Milliron at 8:42 PM No comments:

The parade of snowstorms begins...

Well I woke up to a very pleasant surprise this morning. To see that the GFS and all the other models have finally agreed upon a solution, with a bonus. The storm on Tomorrow night into Monday according to the models right now will dump 5-10 inches of snow, northwest Jersey above 1,000 feet is the HOT SPOT right now for the major snow accumulation. As long as the models stay where they are we should have the first 6+ inch snow event, but remember just 15-20 miles west or east of us will DRAMATICALLY change the amount of snowfall. This is why storms like this are almost unpredictable until it actually happens. Check it out, the map is clickable.

Ok Darren, we a get a snowstorm thats great! Well I told you I have a bonus. And it comes in the form of more snow! A clipper will follow right behind this storm system bringing a good 1-3 inches across the area. But that's not even it! For the next 2 weeks atleast cold artic airmasses will invade the region and there will be no chance for spring like weather and the snowmakers will run whenever they want!
Are you excited? Good because I never told you the bonus yet. A second snowstorm is almost certain on the 17th-18th and according to the GFS it is just as powerful (if not stronger) than the one we are getting tomorrow night. We will take a better look at this storm when the first one is over, take a look.

"Ok Darren enough with the bonus thing, your gunna give me a heart attack". Yes but I'm not done. The NAO is going negative which is great news for coastal develope and backs the idea for the several storms coming our way. "WAIT? Several? How many?" Oh yeah, I forgot to tell you about the 20th storm! That is a little far out right now, but its on the models. And there is more after that.... but let's take this one storm at a time. I am going to make an attempt at a snowmap later on tonight, this should be interesting...
Posted by Darren Milliron at 11:38 AM No comments:

After looking at the models I think I can say how much snow will fall. The GFS brings the storm closer to the coast and gives us a nice 4-8 inches of the white stuff with less to our west and less to our east putting us in the hot spot. Looking at the NAM model it shows a 1-3 inches snow event for us and 3-6 inches closer towards the city and up to 10 inches in southeast New England. The DGEX which has run out of it forecast range had a nice snowstorm yesterday with the area getting 2-5 inches of the white gold. The Euro shows the same as the GFS and the canadian model is showing a similar solution to the NAM. The JMA shows a storm off the coast as well but nothing that we will benefit from. I really think the storm is going to track farther to the east and give us 1-3 inches of light snow, thats our luck anway. If by some weird turn of event the storm does what I want we can expect a nice 3-7 inches of snow. The range is 1-7 inches of snow, just playing it safe. I will let you know my final thoughts tomorrow after the 12UTC runs come out.
Posted by Darren Milliron at 5:33 PM No comments:

One extreme leads another...

One extreme leads to another, ofcourse, that is my saying about how our weather acts. When we had 15 degrees for a high and then 60 just 4 days later I consider that extreme and tomorrow will be even hotter with temperatures nearing the mid 60's and 70 will sneak into South Jersey toward Camden. The warm air came in to try to balance out the abnormal cold air and start to slowly become colder as the week progresses, after tomorrow anyway.
By next week we will be back to normal, normal, in my book there is no normal. On August 28th it was 58 for the high with rain and January 7th it was 60 and sunny and warm, I don't believe in normal, lol. In my opinion we have two snow chances (coastal) in our future. Let's check them out.
The first is in the time period of the 14th-15th of this month. The model has been all over with storm and currently has it going to sea and brushing the mid-atlantic and south Jersey with light snow. I don't think that will happen. The trend is to bring the storm up through the great lakes and create a secondary low off the mid-atlantic coast, thats how its been all year and I don't see why that would change now. We will have to see what the new model runs say when they come out tomorrow. (click for larger image)

The next storm is much more impressive and almost the perfect storm. The GFS does this all the time and I know that it will change with the new model runs. I won't even go into detail with this because it won't happen, well, I can't say it won't but it most likely is a lie courtesy the GFS.

The NAO is expected to go neutral but if these storms are still on the models tomorrow I will bet money that the forecast will change to negative...
Posted by Darren Milliron at 8:08 PM No comments:

After the past few days like Thursday for example with a high of 15 and low of 5 its not surprising that Mountain Creeks trail count shot up like a rocket. All good things must come to end though, like Vermont :( I really miss the 6 feet of snow... Anyway, back to reality here in Jersey where snowfall is not so plentiful. After that extreme cold its only likely that we have extreme warmth, its natures way of trying to get us back to where we should be weather wise. The warm spell will get us into the 60's with no problems and I think 70 can sneak into South Jersey.
Like the cold spell the warm spell will not last forever... it may seem like it though because it will dominate the region for a about a week. Creek will be just fine and spring conditions will be the normal surface but its better than ice, or better than being closed like they were this time last year.
A saying that I made up myself is that "one extreme leads to another of the opposite" and the other is "opposite extremes equal massive explosion". And that is exactly what will happen, on the 14th of the month. Right now it is showing feet of snow but will that happen? The fact is we will get a storm on the 14th, no question about it, but what will the precip type be? It's been very hard to get snow in the I-80 corridor this year and my optimistic attitude has been beaten, stabbed, and thrown down the gutter, but it keeps coming back to me. The storm will bring nice fresh powder to Creek IF we all turn off our heat and put the air conditioners on... Ok, I lied, it will probably sleet again with our luck. lol. Check out this momma, expect a blog everyday to follow the Blizzard of 08'. I'm going to get yelled at for using the "B" word again....

(Click for larger image)
Don't get discouraged, our day will come and we will finally get the first Blizzard since 1996, which will be 12 years ago on this coming Tuesday the 8th of January...
Posted by Darren Milliron at 11:53 AM No comments: