All this extreme cold has lead to not only the lakes freezing but all the major rivers. Ice jams are going to be a major problem during the next thaw and in fact are already causing some minor flooding along portions of the Musconetcong River in Stephans State Park. 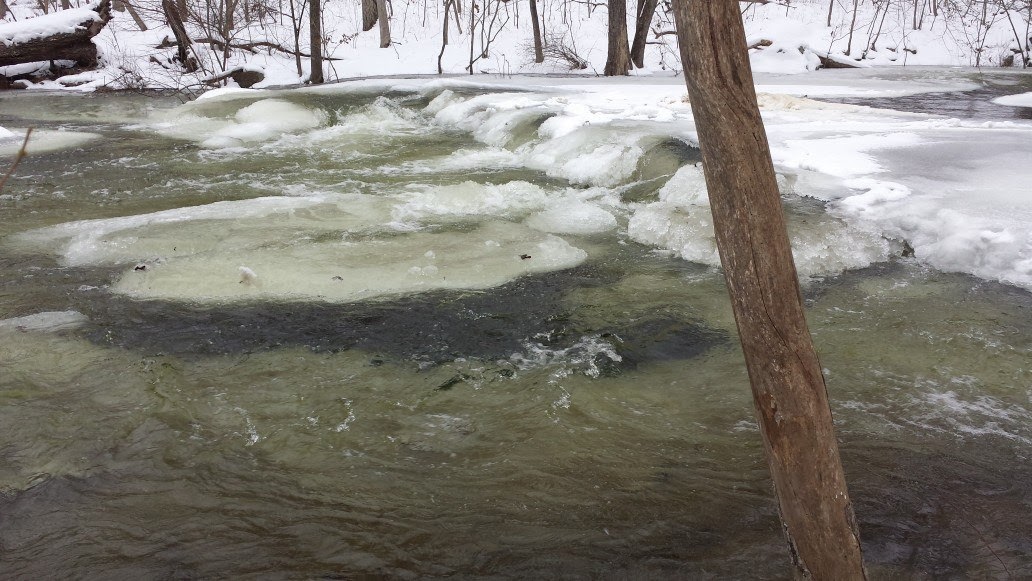 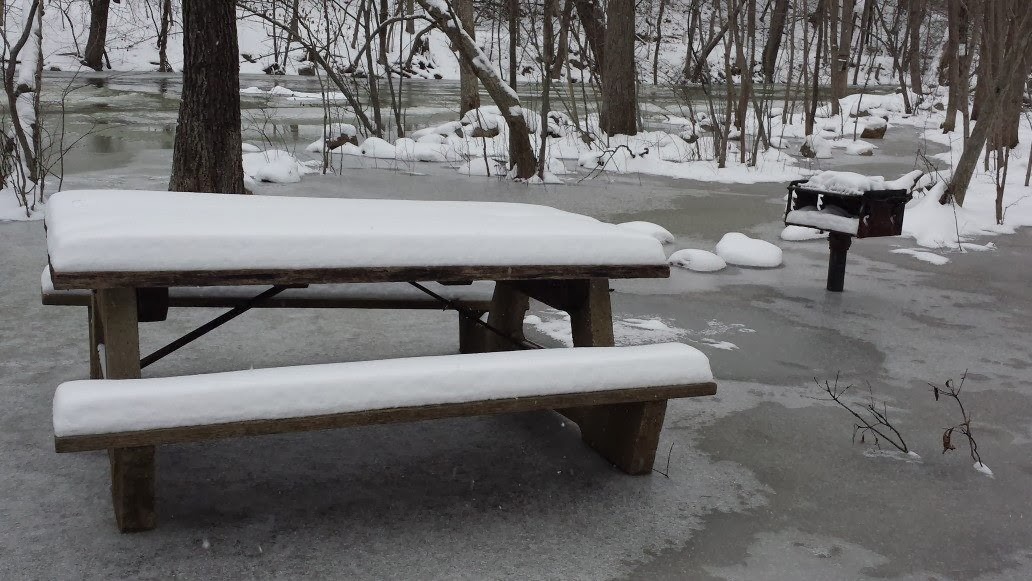 While effects right now of the ice build up is not very significant it will be a serious concern in the coming weeks. Ice jams are unpredictable where and when they will occur and can cause dangerous flash flooding when a ice dam like the one above breaks. Bridges can sometimes get overwhelmed by the ice flows causing failure, and here in New Jersey they were not designed with these situtations in mind.

So where are we at in reguards to winter this year compared to average? Let's take a look. First off here is a look at the current deep freeze. Data taken from my weather station (a centralized location in North Jersey). Impressive but nothing abnormal for January to be honest. This deep freeze will continue for the next week at  least with temps approaching the upper 20's for Monday which will be the warmest day in a two week period. 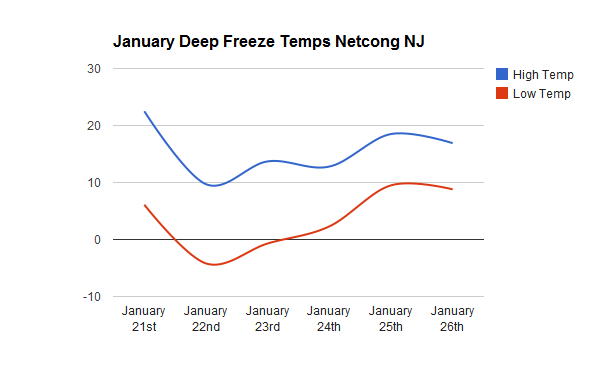 Compared to average snowfall we are currently running just above average with 32" of snow this season and average is around 50" in the highlands with lower amounts in the valleys of around 36"-40". 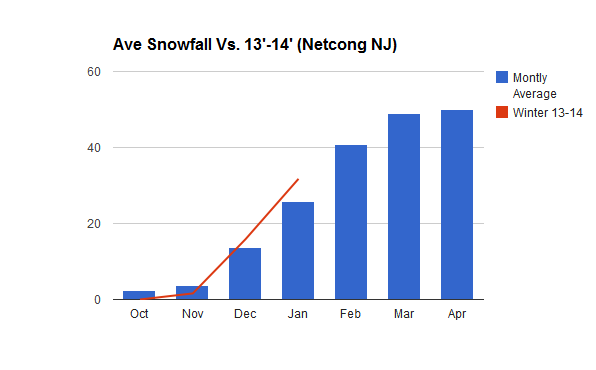 I also like to keep track of the number of days with high temperatures that fail to break freezing. Average for the entire year is around 39 days and today (Sunday the 26th) marks number 37. Clearly well above the average with two months of cold yet to come. Could be a record breaking year if we can top 55 days from the 10'-11' winter. 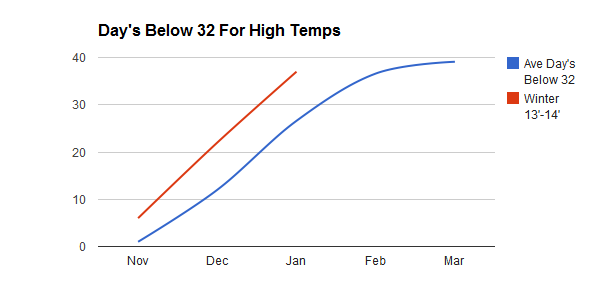 With all that said winter is from over. Check back for updates of any more storm threats.
Posted by Darren Milliron at 4:33 PM No comments:

Over the last few days models have brought the storm further north and west putting North Jersey in a winter storm warning. Some models still have the heaviest precip south of area with a 2"-5" event for the area, other models on the other extreme have as much as 12"+. My forecast will have a safe medium between the extremes and if any new model data in the 00z run shows a significant trend difference I'll revise my forecast.

Here are a look at the QPF on some models: 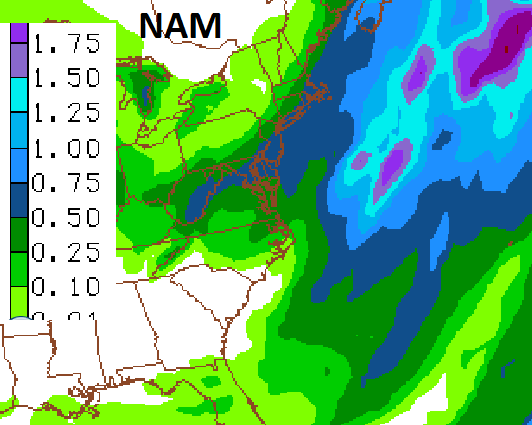 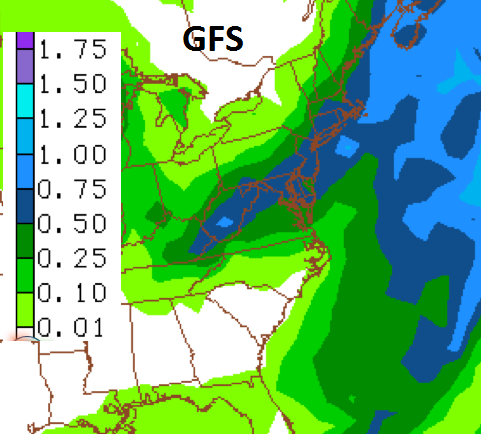 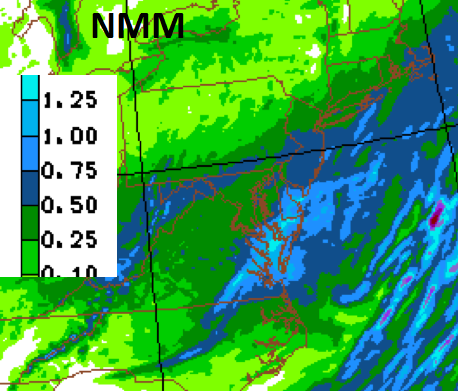 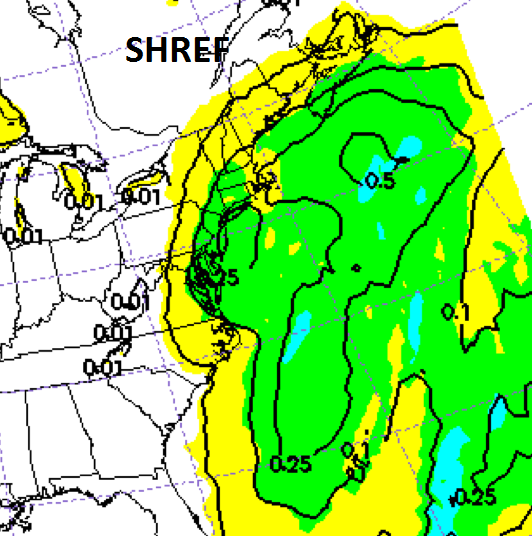 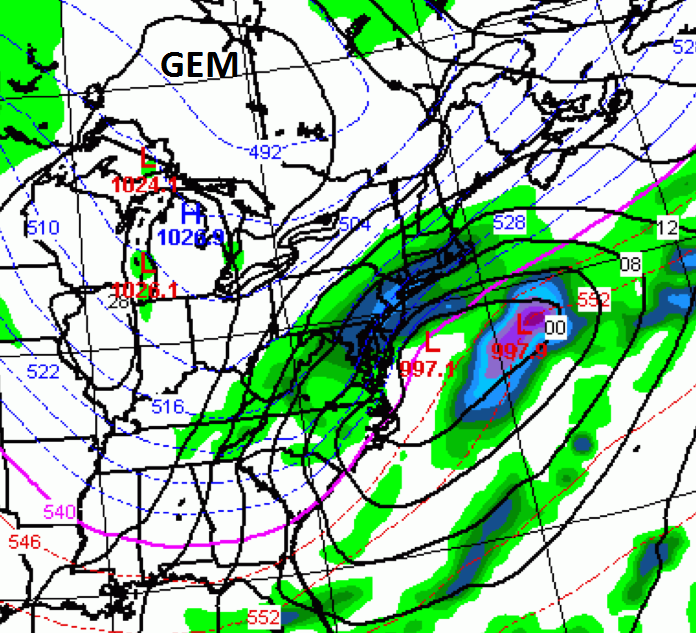 Generally taking the average of these models is the best bet for forecasting an accurate snowfall measurement, but first we need to figure out the snow ratios. Since it will be snowing in the teens and single digits we could see double what the normal ratio conversion is. Off the SHREF we see snow starting as 20:1 and toward the end of the event 35:1 this is opposed to the typical 10:1. 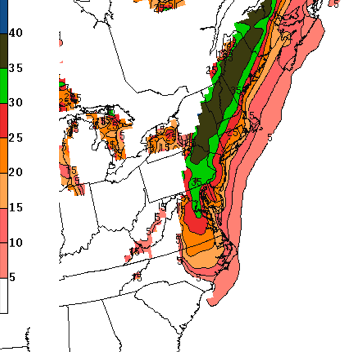 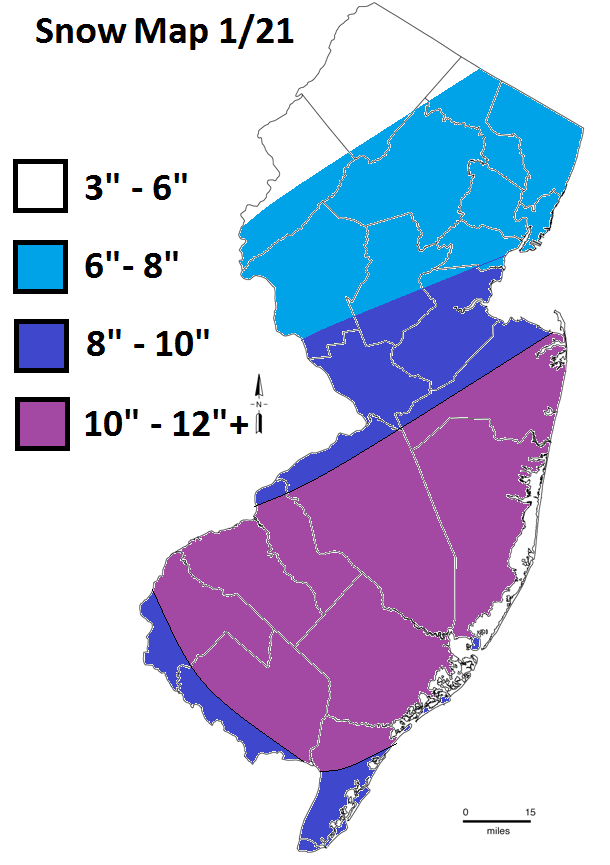 Posted by Darren Milliron at 8:14 PM No comments:

One of the impulses riding along the base of the trough will turn into an accumulating event. Areas from Virginia, Delaware, South Jersey, all the way to Cape Cod will get a 2"-5" snow event. North Jersey may get about an inch with the least toward High Point. More weak systems will continue to move through and each has a possibility of becoming a coastal storm. 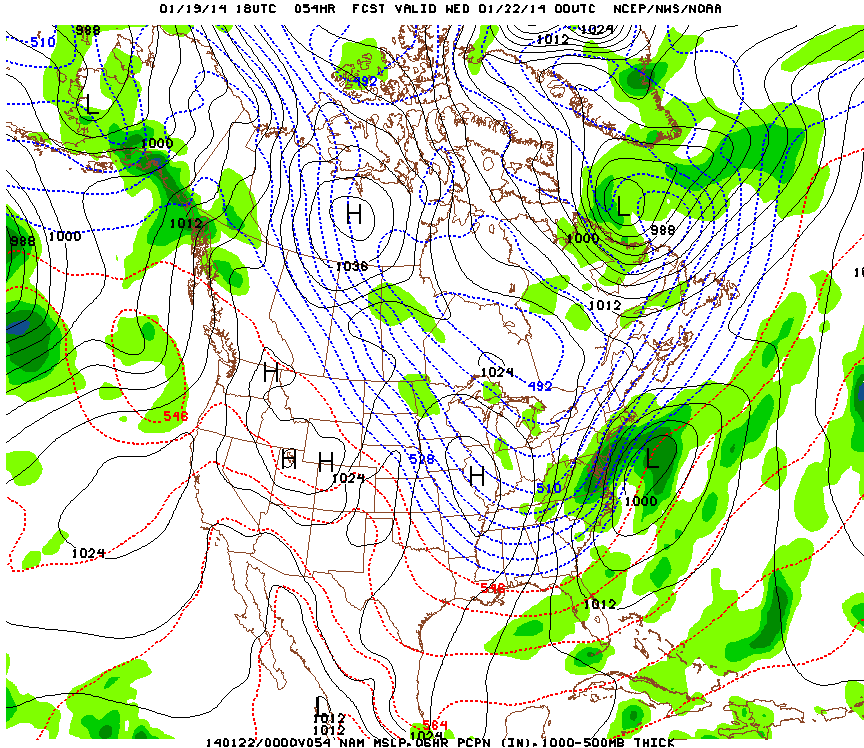 In the wake of the system the polar vortex once again makes an appearance this time coming down through the great lakes instead of the Dakotas. This means it will have less time to modify and could be colder than the outbreak we had earlier this month.... 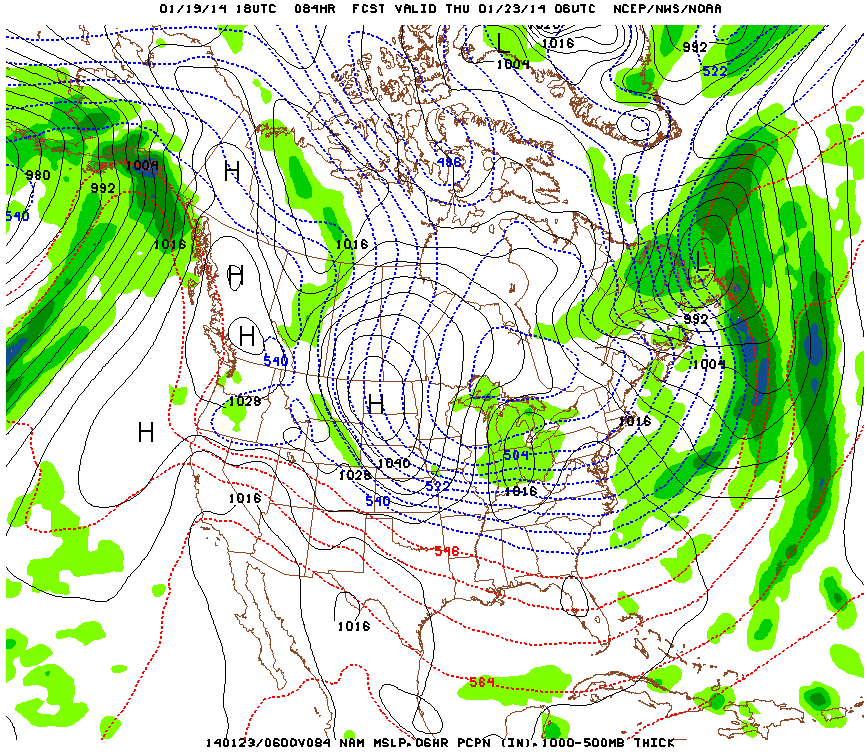 Posted by Darren Milliron at 7:45 PM No comments:

With colder air moving back into the picture comes again the threat of snow. We could see a few snow showers this week (some areas could get a few inches) but it's nothing to write home about. However this weekend another trough will move in with pulses of energy riding along the base. Most models at this point don't allow the developement of any major storms with the exception of the european model for Saturday. 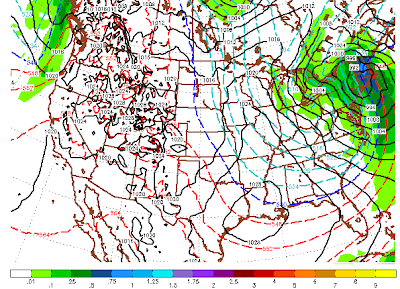 This is not a forecast but the threat exist for one of the pulses of engery to become a major storm and I think one will. However it may form well offshore andbrotate back into Atlantic Canada or go out to sea. More updates in coming days...
Posted by Darren Milliron at 7:56 PM No comments: 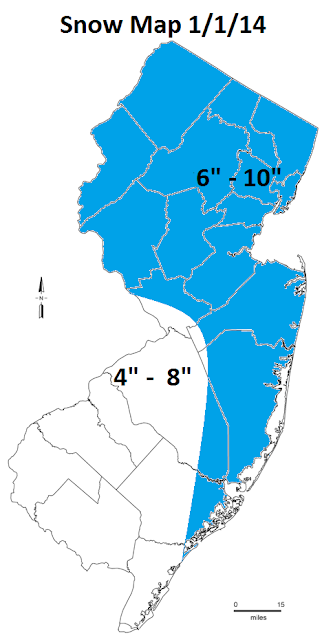 A fairly uniform snowfall for the state of NJ. Most amounts in the north will range from 6"-8" but areas along the east and some areas up north in the coldest part of the storm could see some areas nearing 10" do to higher snow ratios.

Posted by Darren Milliron at 4:42 PM No comments:

Old man winter is back from buisness trip out west and once again at our door step. We have a few interesting event coming up. One is of course the snowstorm on the way and second is the extreme cold on its heels. Let's start off with a few images of QPF for the event. 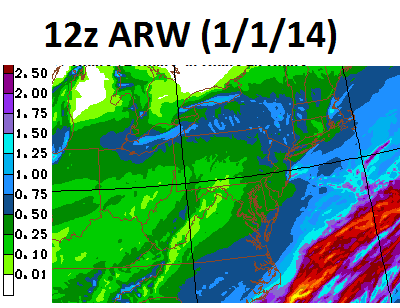 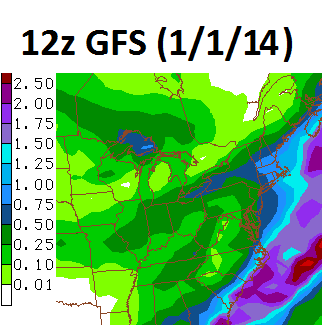 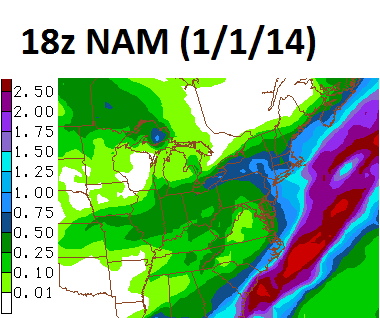 Generally most models are predicting 0.25" (minimum) to a maximum of around 0.75".  On a normal 10:1 ratio (10 inches of snow per 1 inch of liquid) I would forecast a 3"-7" range but this storm is much colder than the typical systems we get. In fact the ratios could be close to double the "standard" near 20:1. Below is a sounding and it's showing the tempertures well below freezing through the entire column. This could cause a 3"-7" to be more like 6"-12". 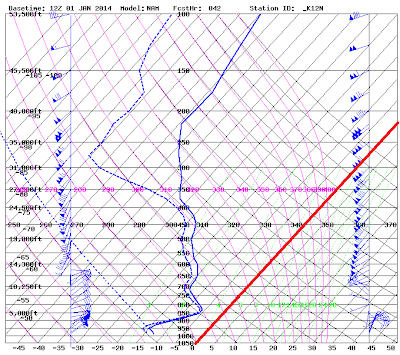 I'm going to post a snowfall map later tonight once I get a better idea of the QPF amounts.
Posted by Darren Milliron at 4:06 PM No comments: