1. The Track: I do believe a New Jersey is the most likely scenario and Ocean County looks like the "average" of the latest paths, though I still like a Cape May landfall personally. Either way it doesn't matter at this point. 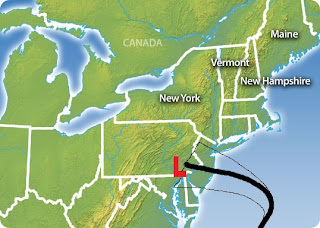 2. Total Precipitation Amount:
Right now it looks as if central Jersey will see the heaviest rain totals. The northern counties will see around 4" while central Jersey can see up to 6" and south Jersey could see totals of around 10". Problem is that in the highlands region the 4" that will fall will be quickly funneled down into the valleys making flooding nearly as bad in these locations as the rest of the state. Also with precipitation moving in from the east to west it will rise over the ridge lines and ring out more moisture over the eastern slopes. Taking a saturated air parcel from sea level to 1,000-1,500 feet will increase the totals and it happens a lot during coastal storms and is noticeable in the average rainfall map for the state.

I find this to be important because the areas downstream from these very highlands are the same areas that are prone to some of the worst flooding in the state like the Rockaway, Passaic, and Raritan Rivers. While rivers are lower now than before Irene we have a major problem. The growing season has ended and most plant and tree species are no longer sucking up ground water and almost all the rain that falls will end up as run off. This model projects what I find to be the best rainfall map for the state: 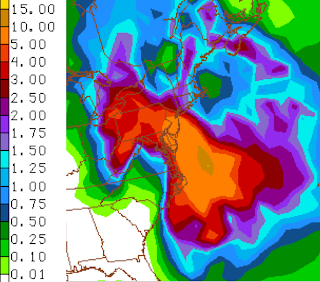 3. Wind Speed:
With the track of the storm over south Jersey we can  expect the worst of the winds to be right over Long Island, toward NYC, and into all of north Jersey. This map is from Wild About Weather (facebook page) and I think they have a great representation of the winds will be like. 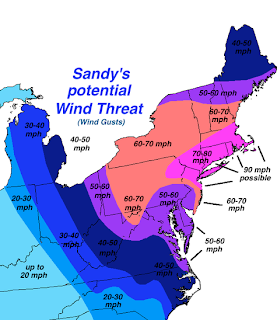 4. Tips:
-Don't park cars under trees or tall objects (I.E basketball hoop).
-Have plenty of cash on hand. ATM & debit won't work without power.
-Fuel up cars and gas cans. Station can't pump fuel without power too!
-Secure all loose objects outside that are valuable or could be a projectile and damage your home.
-DO NOT drive through flood waters under any circumstance!
-Fill up bath tub with water for flushing
-Keep generators OUTSIDE and AWAY from windows. C02 is deadly!
-It's a good idea to fill up propane tanks for the grill to cook on
-Eat perishable foods first if power goes out
-Make sure you have plenty of bottled water
-My number 1 tip is DO NOT underestimate this storm, please don't do anything to put yourself in harms way. Obey all evacuation orders and use common sense.
Posted by Darren Milliron at 10:01 AM No comments: