It looks as if the first significant snowfall of the "winter" season will occur this weekend finally. It's not a block buster by any means but definitely a plowable snowfall. Most models agree on the liquid precipitation amounts and the type of precip.
Here is a look at the 12z NAM frames (1/20/12): 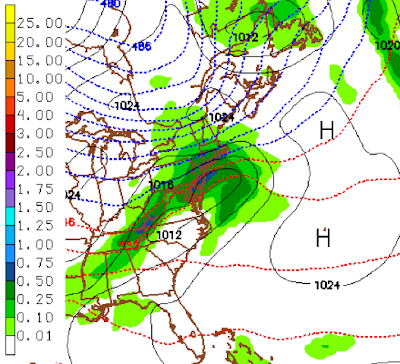 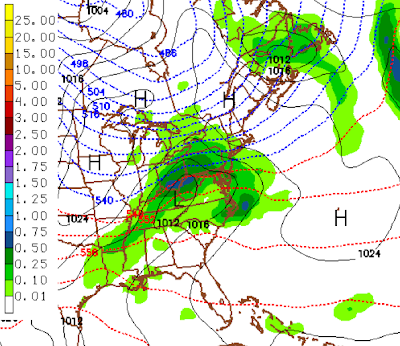 Clearly an all snow event for North Jersey with a atmospheric soundings looking like this:

The solid thick black line is freezing (0 Celsius) and the two blue lines are dew point and temperature. When the two blue lines come together near the surface it means precipitation is falling and when it's all below the freezing mark then it's all snow! I did put the empire state building in there to give you a sense of what your looking at. It's basically a vertical profile of the column of air over your head.
In the sounding there IS a mid level inversion layer which will not effect us in North Jersey but as you get south of I-78 the soundings show the inversion above freezing around 850 mb. This means a change over to wintry mix for those areas therefore snow totals will be lessened the further south you go of 78.
We now know the precip type and the fact a storm is coming! Now how much? First off we need to look the QPF map which is just the total amount of "liquid" precip that falls during the duration of the storm. And here it is off the NAM: 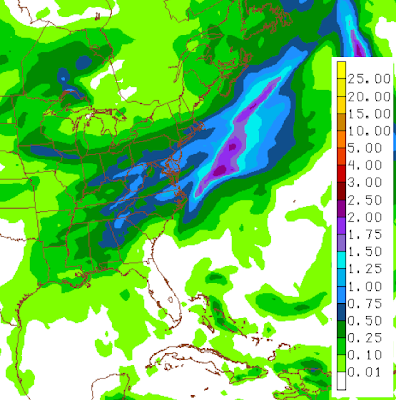 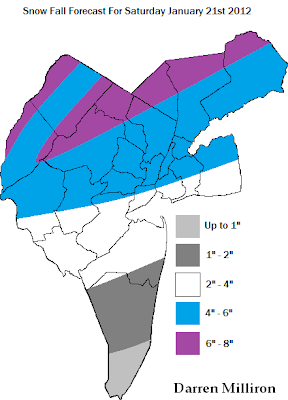 In this storm it doesn't matter your elevation very much but rather your latitude. The axis of snow will be a west to east line so as you make your way south the totals are decreased due to mixing with sleet, freezing rain, and even just plain rain south of Trenton. The higher elevations will be sharply colder than the valleys and for that reason I increased snow totals to 6"-8" for areas above 1,000 feet.
That's it for now. After this storm there will be a warm up so don't expect it to last very long! The pattern does show signs of major improvement so hopefully this leads to a snowy February?
Posted by Darren Milliron at 10:48 AM 1 comment:

My lack of blogging this winter is an indication of very little action going on weather wise. In my last blog I did forecast these most recent cold snaps and also predicted that we would receive very little snow in the forecast period. Since then the NW corner has received under 1" of snow for the month of January. We do have two chances to increase the monthly total in the coming week, but after that it looks like the last week of January could bring warmer temperatures.
First let's get into the clipper system for Thursday. It will produce a few snow showers as it moves on through but with little precipitation to show for it. The system does start to intensify as it gets out over the ocean but too late to give us any meaningful snowfall. Most places will receive very little snow with some lucky folks who get an inch in a heavier batch of precipitation.
Thursday's Clipper: 12z NMM 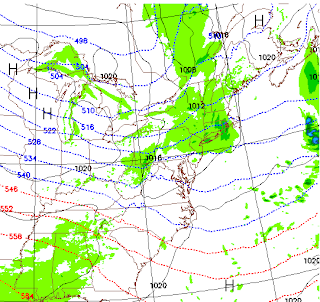 The second event occurs on Saturday, which could give us the first significant snowfall of meteorological winter!? It almost certainly starts as snow but midway through some models suggest a change over to wintry mix which would reduce snow totals down drastically. Other models like the GFS suggest we stay all snow (just barely though). 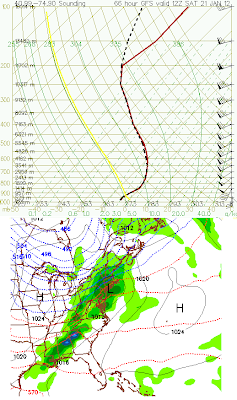 **Check back for the long range forecast and update on Saturday's storm tomorrow.**
Posted by Darren Milliron at 5:59 PM No comments: