Back on October 8th I posted my winter season outlook. (Go check it out, see how right I was) Anyway, let's go over that now.

"All these leads me to believe that winter temperatures will be near normal, day time highs will be below normal but the over night lows will be warmer than normal. With the AMO/PDO in their current phase it suggests that in working with the NAO winter will bring above average precipitation and season snow totals will finally get back to normal to above normal. Whenever the NAO goes negative in the winter I can almost say that a coastal storm will form! That's a good thing for snow lovers. We will have some extreme cold days but because of the AO trend it doesn't seem likely that harsh long-term cold will be the case this year, which is good because really cold weather lowers seasonal snowfall. Remember check the NAO often! Here is the forecasted seasonal snowfall." 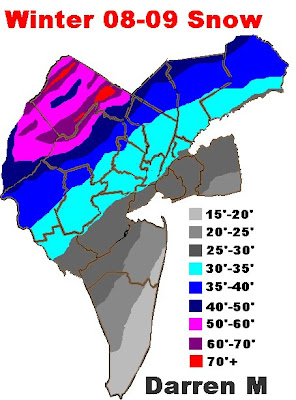 Let's see how this year is REALLY going so far. First we will take a look at the temperatures, and since we got a first snow storm in October I will start there: (Sussex County)

Ok, so with the temperatures I said the season will be near normal. It looks significantly below average to me. Each month the daytime high was colder normal, but every month except January had night time lows warmer than average. Let's see what happens in Feb and March. Moving onto the snowfall amounts. (Sussex County)

Season total so far: 20" - 40" across Sussex County with the greatest amounts in the higher elevations. As of right now, we are right at average, thanks to that rare October snow.

Unfortunately, from central Jersey south they aren't that lucky. Near the coast, they have picked up very little in the way of snowfall. Some places have a seasonal total of a Trace. Just like in my season total snow map, there was going to be a large variation from the coast to the mountains. And I based that mainly off of the warm phase of the AMO. (Read my winter outlook to get a better understanding) http://meteomaddness.blogspot.com/2008/10/north-atlantic-oscillation.html
Posted by Darren Milliron at 2:58 PM